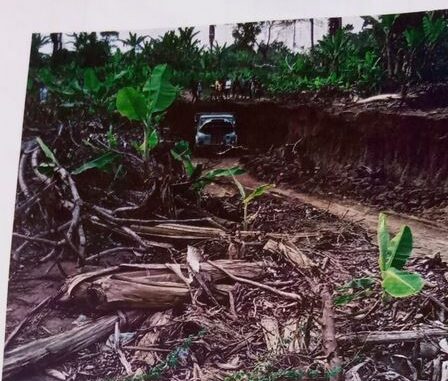 The Baale of Fowowawo in Obafemi Owode Local Government Area of Ogun State, Chief Waheed Muraino, has raised the alarm that some individuals he described as land grabbers were using men of the Nigerian Navy to terrorise his community.

The Baale said the navy personnel have on different occasions brutalised some members of the community, saying they have succeeded in making Fowowawo a desolate village.

According to him, a series of petitions have been written to the Nigerian Navy, the Defence Headquarters, Abuja, the office of the Secretary to the Government of the Federation and the Ogun State police command; saying, however, that the invasion of his community is yet to be addressed by the concerned authorities.

In a petition addressed to the Flag Officer Commanding, Western Naval Command Harbour Road, Apapa, Lagos, in January 29, 2021, Muriano, through a counsel, Olamide Charles Osumah of Peachtree Solicitors, claimed that some members of one Ogunleye family have been employing the services of soldiers to trespass on his land in Fowowawo, near Magbon Etido.

The community leader said he had obtained a judgement on the said land against the Ogunleyes in 2015, saying “they (the Ogunleyes) are now being aided by soldiers, who brutalise and kidnap my people to give them forcible entry into the land.”

In another letter to the office of the Secretary to the Government of the Federation and Ministry of Defense on May 4, the Baale alleged that naval ratings under their Commandant, Ofem Ubi, stationed at Arepo, had on May 1 “invaded the village and abducted three people, namely, Mutiu Adenekan, Michael Adio Sotinoye and Fatai Sultan; and they were locked up in a container somewhere in the forest.”

According to him, one of the three arrested persons, Mutiu Adenekan, was released with instructions that he should go to and “inform the rest villagers to vacate the village and not to ever come back to the village again.”

Speaking, Muraino said, “the village is now empty, everybody has fled. I fled too to save my life. I cannot go to Fowowawo now. If I go, they will kill me. They will come at night to shoot guns. All our farms have been destroyed because of dredging.

“One of my brothers, Michael, was taken away by the soldiers. They poured petrol in his ears. He spent 12 days in their custody before they could release him. He later lost memory and became very sick. We took him to hospital, but he died eventually. Another one, Seyi Sodipo, was just released on Thursday after he spent seven days in Apapa. You need to see how he was seriously brutalised.

“Many have been injured by these people. We can no longer enter our own village. That is why we are calling on Governor Dapo Abiodun, the police, human right activists and all Nigerians to come to our rescue. We are the original owner of this land in dispute and the court has affirmed that. If all I have said is not true, let the government and all Nigerians sue me for making false allegations,” the Baale stated.

Contacted, the Ogun State Police Public Relations Officer, Abimbola Oyeyemi, confirmed that the police are aware of the petition written by Muriano.

Oyeyemi said investigation has commenced into the allegations.

“He has written a petition to the police and the case has been assigned to the state CID, and I believe the state CID is on it. We have even invited them, but the other party sent their lawyer the day they were supposed to meet, seeking for the extension of time. The state CID is investigating the case,” Oyeyemi stated.

Also, a member of the accused Ogunleye family, Mr Sufi Taiwo Ogunleye, denied the allegations against him and other members of the family, saying “we have no link with the naval personnel.”

Taiwo said Chief Muraino should be blamed for everything happening in the area.

Meanwhile, the Nigerian Navy said it would react to the allegations officially.

In a telephone interview with our correspondent, the accused officer, Ofem Ubi, said, “We have equally received the letter and we are addressing it officially. Whatever is our official response, you will know. There is really nothing there. We are responding officially, please.”