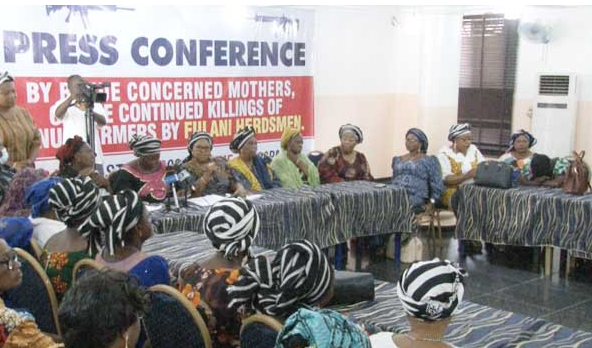 A group of women known as Concerned Benue Mothers (CBM) has called on President Muhammadu Buhari to urgently address the nation and caution Fulani herdsmen to stop the killings.

The Benue Mothers who were drawn from the three Senatorial Districts of the state made the call on Monday while addressing journalists in Makurdi, the state capital.

The group led by a former federal lawmaker, Rebecca Apedzan, called for a National Ranching Policy and called on President Buhari to cancel the planned imposition of grazing reserves on Nigerians.

The statement reads: “We call on President Muhammadu Buhari to urgently address the nation and caution Fulani herdsmen to stop the killings. We know that if he makes the address directly to Fulanis and means every word of what he says, they will listen to him.

“The President should, as a matter of urgency, announce the cancellation of his plan to impose grazing reserves on Nigerians and instead evolve a National Ranching Policy.

“The Federal Government should also throw its weight behind Southern Governors’ Asaba declaration against open grazing.

“President Buhari should motivate security agencies and direct them to be professional and neutral in the discharge of their duties.

“We also expect Mr President to call his appointees to order to stop assaulting the sensibilities of Nigerians. What the Minister of Justice Abubakar Malami said comparing the ban on open grazing with spare parts business was insensitive, condemnable, and akin to fanning embers of crisis.

“The other aide of the President called Garba Shehu denigrates anyone who holds an opinion contrary to that of the Presidency. This is gross negation of the tenets of democracy. In democracies where government is of the people and for the people, leaders of such countries listen to constructive criticism in order to improve.

“We call on the international community and lovers of peace across the world to show interest in what is happening in Nigeria, particularly in the Middle Belt region where killings of innocent people by herders have become a common sight.

“Benue for instance, is the food basket of Nigeria and for many years, farmers have been displaced from their ancestral lands. The ugly scenario has resulted to food crises and is set to take a more dangerous dimension if not stopped now.

“We expect the Federal Government to fulfill its promise to assist the Benue State Government in resettling the displaced people back to their homes. The longer the IDPs stay in the camps, the worse their plight will get.

“We also want to urge our sons and daughters who are still sitting on the fence to wake up and speak against the evil being perpetrated in our land. This matter is not only about Governor Samuel Ortom. Benue sons home and abroad who think that they are not affected by the crisis must know that we are all casualties whether we are at home or not.

“They should raise their voices to condemn the injustice being visited on us. This is no time for politicking. They should send relief materials to those in IDP camps and also solicit the support of international donor organizations to come to the aid of our people.

“Finally, we wish to call on Nigerians who love justice, peace and equity, to rise and condemn what is happening to the innocent people of Benue State. The killer herdsmen are still here with us. They have resorted to guerrilla warfare. They now attack our people in their sleep and leave their familiar trademark of death.”