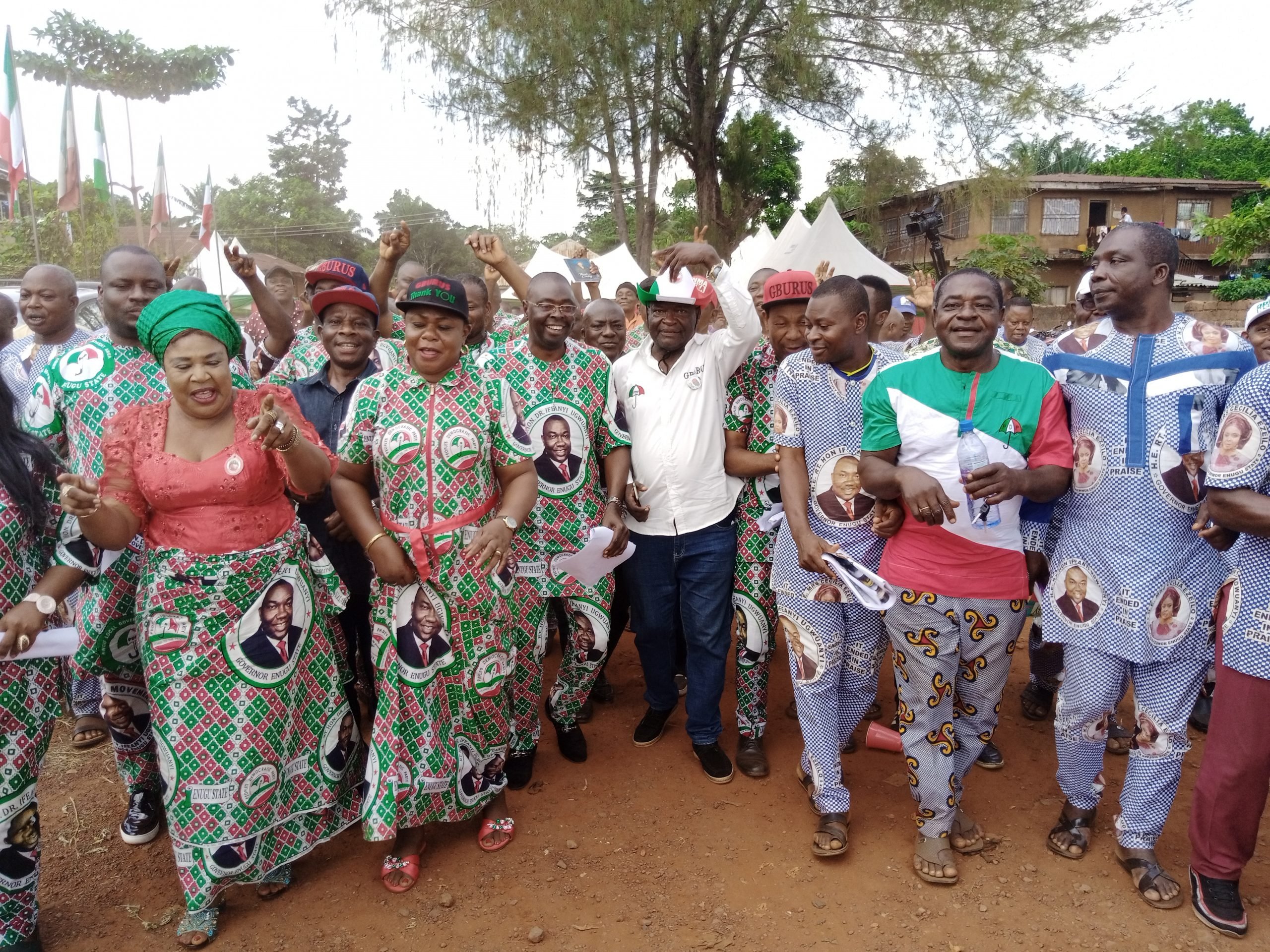 Members of the party in the zone said the confidence vote was influenced by Governor Ugwuanyi’s landmark performance across the three Senatorial zones of the State.

The decision follows a 6-day assessment tour conducted by the party ahead of the May 29 Democracy Day celebration, which also marks Ugwuanyi’s 6 years in office.

At a well-attended meeting of the party leaders and stakeholders at its zonal office in Nsukka, they said despite the economic quagmire and paucity of funds which is confronting Ugwuanyi’s administration and the country at large, he had performed satisfactorily.

A communiqué issued after the meeting was read to journalists by Hon. Mike Onyeze, Enugu North Zonal Chairman of the party.

They observed that the unfriendly economic situation that greeted the present administration had remained unabated 6 years into the 8-year term of the Government and the end was not yet in sight.

“Consequently, as the PDP in Enugu North Senatorial District, embarks on an effort at retooling and refocusing the Party for greater efficiency and effectiveness, it became necessary to assess our government’s impact on our people to ascertain the extent to which the Party has delivered on our campaign promises irrespective of the unsympathetic economic situation under which the government operated and still operates.

“The assessment exercise was guided by some set standards, namely: identification of high-impact projects executed by the government; the responsiveness of such projects towards addressing the challenges of the people; their needs, yearnings, and aspirations as well as citizens disposition towards the government, among other benchmarks.

“In the course of the exercise, the tour had occasional stop-overs in strategic places in the 6 LGAs in the zone to ferret out people’s opinion on their perception of the government vis-à-vis the quantum of projects identified and the extent to which their lives have been touched in positive ways,” the party stated.

They further noted that based on the numerous high-impact projects accessed and assessed, “we are happy to announce that His Excellency, Rt. Hon. (Dr.) Ifeanyi Lawrence Ugwuanyi, the Governor of Enugu State has done exceedingly well in the last 6 years, the national economic downturn notwithstanding.

“The people’s verdict, based on human development index factors, was a resounding approval of the good work of the PDP-led government of Enugu State.

“In the Health sector, for example, he launched the Universal Health Coverage in Enugu State, intervened and integrated faith-based rural health facilities into the Free Maternal and Child Health Programme. This policy initiative, as we could see on the ground, propelled many other giant strides in the health sector such as the completed state-of-the-art Enugu State Medical Diagnostic Centre, Enugu and construction of Type 3 hospitals in many LGAs of the state, the construction and renovation of district hospitals and health centers in the state, especially in virtually all LGAs/ rural areas in Enugu state under the primary healthcare program.

“In response to COVID-19 pandemic, he released N350 million to the State’s COVID-19 Multi-Sectoral Rapid Response Team, established Isolation and Treatment Centres for COVID-19 and equipped the ultra-modern Enugu State Medical Diagnostic Centre and designated it as an isolation and treatment center, approved welfare packages for all health workers in the state as an incentive to battle COVID-19; purchased two additional ambulances and one incident vehicle, enforcement of the Presidential directives on nationwide curfew and inter-state movement restriction order, and later awarded contracts for the rehabilitation of facilities and provision of essential supplies in 34 health amenities across the 17 LGAs in Enugu state to increase the tempo of delivery of linked services and preparedness against community spread of COVID-19 pandemic by the Enugu State Save One Million Lives (SOML) Project, among others.

“In the Education Sector, he recruited over 5000 primary and secondary school teachers in the state, constructed, renovated and equipped 897 classroom blocks and other school projects under Enugu State Universal Basic Education Board (ENSUBEB), procured and distributed 22,150 lockers and 22,150 chairs for primary school children, 1.228 tables, 1,228 armchairs and 2,456 armless chairs for the teachers, as well as I130 marker boards for teaching and 1,960 ceiling fans, for conducive learning environment (under ENSUBEB), procured and distributed 12, 480 modem writing desks and chairs for primary school pupils in the state and 868 tables and chairs tor teachers to improve the standard of learning (ENSUBEB), massive construction and reconstruction of classroom blocks, offices and hostels in the secondary schools across the siX education zones of the Post Primary Schools Management 3oard (PPSMB).

“On economic welfare of the citizens, Peace, and Security, the Governor was among the first to implement the new Minimum Wage in Nigeria. He pays workers’ salaries on the 23rd of every month and retirees pensions before the end of the month. He also pays a 13th-month salary to workers as a Christmas bonus. Similarly, he pays 54 percent contribution for 100 lucky civil servants who won the 100 units of one-bedroom apartments at Elim Estate, Enugu through an open lottery.

“On Security which is the bane of our nation today, our opinion polls gave special credit to the Governor for the procurement and donation of 100 units of Innoson Vehicle Manufacturing (IVM) patrol vans with communication gadgets to the security agencies and their operations: the employment of 1,700 Forest Guards, which was the first in the South-East geo-political zone, the repositioning of the Vigilante/Neighbourhood Watch
groups and purchase of 260 security vehicles for their Community Policing operations, the procurement and distribution 260 motorcycles and 300 bicycles to the 260 electoral wards in the state, to assist and facilitate the operations of the Forest Guards, the construction of the 76 Police Mobile Force Squadron Facility at Ekwegbe, Igbo-Etiti LGA, among others.

“The result is that today, Enugu state is comparatively peaceful and accordingly adjudged to be the most peaceful state in Nigeria.

“On high profile economic ratings, the PDP is exceedingly happy that through dint of hard work, creativity and prudent management of scarce resources, the PDP government of Enugu State ably led by His Excellency, Rt. Hon. (Dr.) Ifeanyi Lawrence Ugwuanyi has stood out in the crowd to enjoy high profile economic ratings among other states in Nigeria.”

They outline other key shining areas of the State Government to include “Enugu state being rated as the second most advanced state in Nigeria on the Ease of Doing Business by the World Bank Group;

“Enugu State is the first in the southeast geo-political zone and ninth in the country based on IGR as against Federal Allocation;

“Enugu State is the best state based on the judicious utilization of the bailout funds, (Nigerian Senate Verdict);

“Enugu State is listed alongside Lagos and Rivers as the only three states out of the 36 states of the federation that have fulfilled obligations to their workers
(Budgl1);

“Enugu State is the fifth most competitive state in Nigeria, according to the National Competitiveness Council of Nigeria;

“Enugu State is the third most debt sustainable State in Nigeria;

“Enugu State is the first state in Nigeria to publish its Audited State Final Account for consecutive three years; and Enugu state is one of the twelve states in Nigeria that can survive without federal allocation.

“After an exhaustive assessment of the self-evidenced positive impacts of the PDP-led government of Enugu State on the good people of Enugu North Senatorial zone in the context of the entire Enugu State as one huge family, we are immensely satisfied with the positively impactful transformation going on in the State in general and Enugu North senatorial District in particular.

“We are also very happy that with the achievements of the PDP-led government in our zone as in other zones of the state, the future of our great Party in Enugu state is very bright.

“Consequently, we the entire members of the Peoples Democratic Party (PDP) in Enugu North Senatorial District, hereby unanimously pass a Vote of Confidence on Rt. Hon. (Dr.) Ifeanyi Lawrence Ugwuanyi, the Governor of Enugu State who is not only the leader of the PDP in Enugu State but also the leader of the Party in the whole of the South-East zone of Nigeria.

“We also unequivocally pledge to support him with single mindedness of purpose in any future aspirations he may
wish to have for the good of humanity in general and Nsukka Senatorial District in particular. Furthermore, as the political leader of the state, we await him to provide us with political direction going forward.”