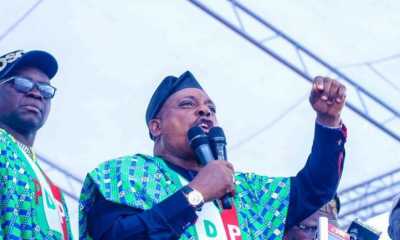 The ruling was given by a Rivers state high court as damages for defamation.

Recall that Lai Mohammed had in 2018 released a list of looters where he included Uche Secondus name.

Challenging the inclusion of his name in a suit marked PHC/1013/2018, the PDP chairman demanded a retraction of the publication, an apology, and payment of N1.5 billion “being general damages for humiliation, castigation, verification, attack of his person and integrity by the defamatory publication”.

Secondus lawyer, Emeka Etiaba, had also written to the minister seeking an immediate retraction of his name and payment of N1.5 billion as damages within 72 hours, failure of which he threatened a lawsuit.

In the suit, he sought an order of the court “directing the defendants to retract the said publication and apologise in writing to the claimant for the defamatory publication”.

“An order of this honourable court directing the defendants to publish the retraction and the written apology in all the news and social media including but not limited to The Nation newspaper, THISDAY newspaper, Sun newspaper, Guardian newspaper, Punch newspaper, Nigerian Television Authority, Channels Television, amongst others, where the defamatory materials were published”, was also sought.

The suit also sought “an order of perpetual injunction restraining the defendants their agents and privies from further publishing the defamatory publication against the claimant”.

Delivering judgment on Thursday, the chief judge of the state, A.I. Iyayi-Lamikanra, ordered the defendants to issue a public apology and publish same in a newspaper.

He also granted an order of injunction restraining the defendants, whether by themselves or their agents, from further publishing defamatory statements against Secondus.