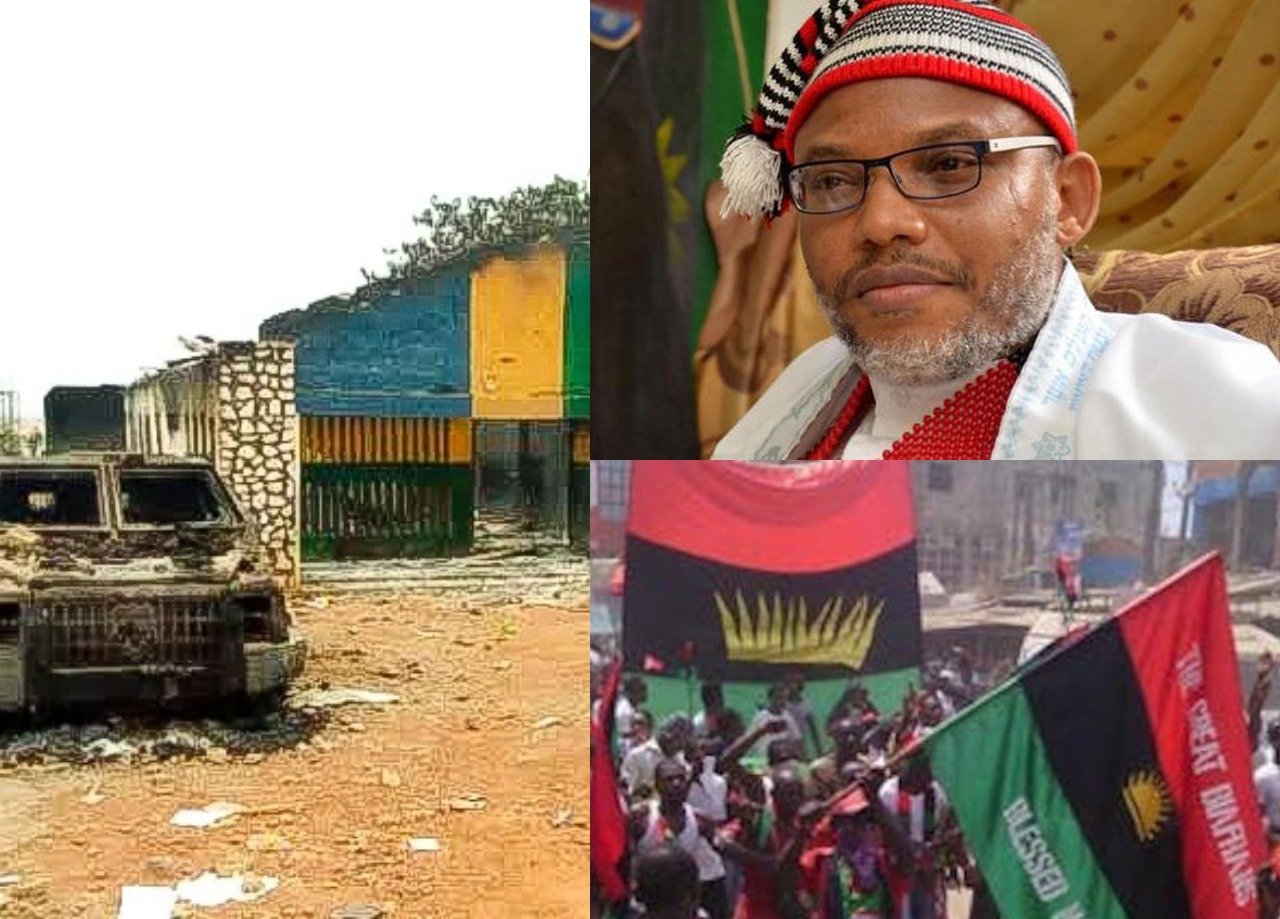 Attacks on police formation and it’s operatives in the southeast of Nigeria has continued unabated, with the lastest killing of two officers at Ubakala Police Station in Umuahia South Local Government Area of Abia State by yet-to-be identified gunmen.

It was gathered that unknown gunmen attacked the Ubakala Police Station early Monday morning in Umuahia South area of the state.

The bandits razed the main building of the police station, five patrol vans, six exhibit vehicles, motorcycles and tricycles, and as well carted away two rifles belonging to the slain policemen.

The latest onslaught by the gunmen on the security formation was coming barely three days, after some hoodlums had set ablaze a police station at Ubani township Market in Umuahia North Local Government of Abia State.

The Police Command in Abia State had confirmed the attack by the hoodlums.

The Spokesman of the state command, SP Godfrey Ogbonna had said two officers were shot in the legs by the attackers.

Ogbonna said the attackers also burnt down the generator house and a multi-purpose building, belonging to Bende Local Government.

He said the hoodlums later released criminal suspects, who were detained at the station.

“They also burnt two vehicles, including the Divisional Police Officer’s Highlander Jeep and three motorcycles parked at the station.

“We do not know yet how they all gathered to execute the attack at the station.

“Maybe, they parked their vehicles away from their target and walked through footpaths to the place,” he said.

Also recall that at the earlier stage of the criminal attacks in Abia State, unknown individuals reportedly razed down a police station in Uzuakoli, Bende local government area.

It was further gathered that the incident occurred in the early hours of May 3rd, 2021 when the assailants invaded the station.

See also  EFCC appeals to court not to set aside arrest warrant on Adoke, Etete

Disclosing some of the approaches in nipping in the bud the worsening attacks on security facilities and government critical infrastructures by the assailants in Abia, the State Police Command reiterated its avowed commitment and determination to make Abia an unsafe haven for criminal elements.

Police Public Relations Officers in the State, SP Godfrey Ogbonna said the command has embarked on full investigations into the recent gunmen attacks in different parts of the state.

The Command also disclosed its synergy with sister security agencies to curb every nooks and crannies of the state of hoodlums, kidnappers and bandits.

Meanwhile, speaking on the parts of the government’s proactive measures in dealing with the criminal monsters threatening the peace of Abia populaces, during one of his official engagements, Governor Okezie Ikpeazu vowed that his administration shall use every lawful means to protect and safeguard every inch of the territory of Abia State from criminals and marauders.

He described Abia State as a safe haven for investors and business operatives.

The Abia Governor further revealed that the improved security situation in the State, coupled with access roads created by his administration had increased businesses, while government has also provided enabling environment for business to thrive.

However, despite Governor Ikpeazu’s statement, rating Abia as safe haven for its citizenry and business investors, coupled with his administration’s proactive steps in quelling attacks on security formations by the hoodlums, the yet-to-be identified individuals have continuously and steadily launched attacks on police stations, and in extension, government infrastructures including the branch offices of the Independent National Electoral Commission (INEC) in the state.

Following the unabated criminal attacks on security agencies and their operatives by the unknown assailants in some parts of Abia, blames and counter-blames over who is responsible for the current activities of of the unknown gunmen in the state have emerged.

Observers are of different opinions. While some have accused the opposition elements of being behind the several attacks on security formations and government facilities by the unknown gunmen as part of their grand plots to sabotage the gains and progress already achieved by the Abia Government in the security of lives and property, others have observed that the proscribed group in the southeast zone, the Indigeneous People of Biafra (IPOB) and it’s security outfit, Eastern Security Network (ESN) are behind the current killings of security personnel and the burning down of Local Government Area division offices of INEC and NDLEA.

They equally posited that members of the proscribed IPOB were allegedly carrying out the heinous attacks on security formations to mop up the police arms and ammunition and use the armouries to further fortify personnel of ESN to sustain the their attacks in various states of the southeast geopolitical zone.

On Wednesday, following the attacks on several locations across Abia State, gathered that the attacks on security formations and government facilities resulted from the alleged brutality of the Nigeria police against pro-biafra agitators during and after the military invasion of the Umuahia residence of the leader of the Indigeneous People of Biafra (IPOB), Nnamdi Kanu. Most of the Biafra agitators mostly in Aba axis of Abia recalled their earlier vow to make southeast zone ungovernable for the five governors in the region, who they believed were aiding and abetting Nigeria security forces in the continuous killing of pro-biafra agitators.

The investigation revealed that the continuous detention of most of biafra faithful, and refusal of the governments at all levels to unconditionally release IPOB members arrested during its military invasion in Afaraukwu Umuahia, and remanded in prisons across southeast and other parts of the regions without diligent and fair trails which in turns infringed their rights to freedom of association or right to seek self determination as provided by conventional laws, were part of the major factors that led to the current insecurity situation in the state, making the nation’s security operatives and their formations as targets and victims.

The current upsurge of attacks on government’s critical infrastructures in Abia and other states of southeast was compounded by the killing of prominent ESN Commander, Ikonso Don by the soldiers invited by the government. The pro-biafra group and agitators have vowed not to ceasefire till justice prevails on the murder of the ESN commander and the extra judicial killings of hundreds of biafra agitators.

Meanwhile, in the course of the investigation on Wednesday, normalcy has returned to the affected places as different combined teams of security agents were stationed in strategic areas to forestall further attacks on the state by the0 unknown gunmen.

But worried by the worsening attacks in the state, Governor Okezie Ikpeazu had on Monday, met with members of his cabinet in Aba to deliberate on additional measures needed to ensure the protection of lives and property in the state. Briefing newsmen after the meeting which was attended by the Deputy Governor, Rt Hon Ude Oko Chukwu, and other members of the state executive council, the Commissioner for Information, Chief John Okiyi Kalu, stated that the state government was set to organize a security roundtable involving key stakeholders in the state to review the prevailing situation and recommend measures to further improve security in the State.

According to him, the roundtable which is expected to last for 36 hours, will hold in Umuahia the state capital, and is expected to bring together serving and retired security officers of Abia origin, Chairmen of Local Government Areas and Traditional Rulers with a view to recommending lasting solutions to the challenges of insecurity affecting the state in particular and the nation in general.

As the attacks on security formations continue unabated, Abia citizens and residents are looking up to the State government under Dr. Okezie Ikpeazu to redouble its efforts and ensure decisive steps are taken to end the series of attacks occurring in some parts of the state, almost on daily basis.