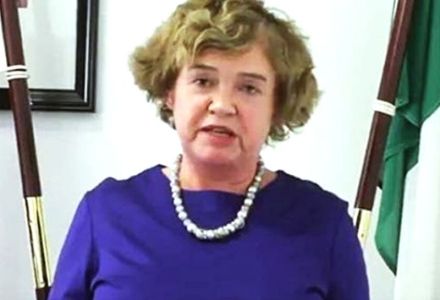 The British High Commissioner to Nigeria, Catriona Laing, has said they would prefer the two leading parties in Nigeria, present younger candidates with female running mates during the 2023 general elections.

Laing stated this in Port Harcourt, the capital of Rivers state, during her maiden visit.

She cautioned Governor Nyesom Wike and Minister of Transportation, Rotimi Amaechi, to cement their legacies on a positive note by ensuring peaceful elections in Rivers State.

According to Laing, the UK would deny visas to Nigerians who disrupt 2023 elections.

To Wike and Amaechi on the next governorship election in Rivers state, she said: “It is essential that there’s a peaceful election in Rivers State. It’s going to be a crucial part of his (Wike) legacy, how the election goes in this state. We’ve been saying the same thing to Amaechi.

“Another thing we will be doing is to remind people that if people do incite violence or act violently, we will be prepared to deny them visas to the UK. We will make that statement clear and say it over again.”