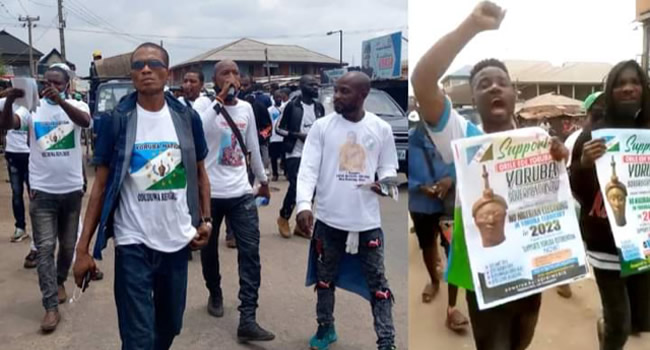 Reports have emerged revealing that operatives of the Department of the State Service (DSS) on Saturday clashed with some supporters of Yoruba activist, Sunday Adeyemo, popularly called Sunday Igboho.

It was gathered that the DSS operatives and Sunday Igboho’s supporters tackled each other at the premises of the palace of the Ataoja of Osogbo, Oba Jimoh Olanipekun.

Recall that Igboho had stormed the Nelson Mandela Freedom Park, Osogbo, the Osun State capital, to demand Oduduwa Republic but after the rally ended, the activist and his men reportedly paid the Ataoja of Osogbo a courtesy.

Trouble, however, started when Sunday Igboho and his men were exiting the palace, as a DSS operative accused of trailing the group was manhandled, The PUNCH reports.

In a viral video on Sunday, a DSS operative was seen guarding his pistol while Igboho’s supporters mobbed him, after he was accused of trailing them.

As that was being resolved, some DSS operatives standing in one corner of the palace were charged at by some supporters of Igboho, who accused them of firing shots inside the palace of the Ataoja.

In the ensuing melee, several gunshots were heard, as Igboho and his supporters left the premises.

A man, in another video accused of attempting to write the number plate of the vehicle that brought Sunday Igboho to Osogbo, was seen being interrogated.

The man, who gave his name as Olayinka and claimed to be working for the Federal Government and DSS, owned up to the allegation that he was caught while attempting to copy the number plate of Igboho’s vehicle.