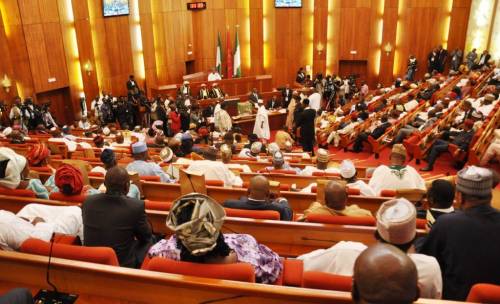 The Senate has said some of its members who are pushing for impeachment proceedings against President Muhammadu Buhari are not serious about the issue.

Members of the opposition parties in both chambers had also threatened to invoke their constitutional powers and move against the President if he failed to tackle the worsening insecurity.

But reacting, Senate spokesperson, Ajibola Basiru (APC-Osun Central) said on Friday that his colleagues should not play politics with the issue of security.

“I don’t think they (pro-impeachment senators), are serious about it!

“They ought to know better that national security is not politics plaything,” he added.

Meanwhile, President Buhari is set to jet out of Nigeria for France today, Sunday, May 16, 2021.

The President will be in France on a four-day official visit to attend African Finance Summit which would focus on reviewing the African economy, following shocks from the Coronavirus pandemic, and getting relief, especially from the increased debt burden on countries.

The summit is to be hosted by the President of France, Emmanuel Macron, and would be attended by major stakeholders in the global finance world as well as other heads of government.

Buhari will be accompanied on the trip by some Ministers and intelligence/security chiefs.

The full statement on Buhari’s trip as made available by the Presidency on Saturday reads: “President Muhammadu Buhari would on Sunday, May 16, 2021, depart Abuja for Paris, France, on a four-day official visit to attend African Finance Summit which would focus on reviewing African economy, following shocks from Coronavirus pandemic, and getting relief, especially from increased debt burden on countries.”