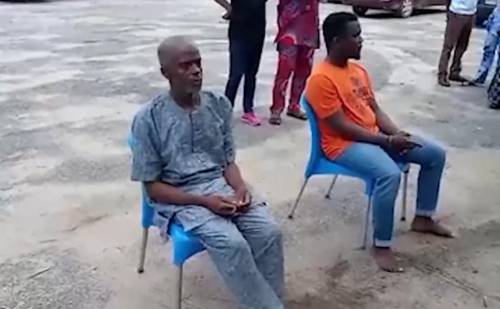 Frank Akpan, father of the alleged murderer of late Iniubong Umoren, has denied his involvement in the killing of the graduate of the University of Uyo.

Akpan who spoke on Friday when paraded at the Police Headquarters, Ikot Akpan Abia, Uyo, denied knowledge of the crime until he was invited by the police.

The retired director in the Federal Ministry of Lands, however, admitted that the house in which the murder was committed was his own.

Akpan also said he is not aware that his son to have lured and raped more than six girls through advertising for phony job vacancies, adding that he has never being in the business of selling human parts as alleged.

He said, “I’m not aware of that. The reason is that we just relocated from Abuja. I have not been around for 30 years. We just relocated because I have been retired. It is not even up to two years since we came back.”

Asked to comment on the kind of justice he expects in the case, Akpan stuttered and said, “I’m not happy about what my child had done. I don’t even believe this can happen to me after I had sent them to school, tried to bring them up. Yes, justice can be done if the system so permits.”

Speaking, the state Commissioner of Police, Andrew Amiegheme, said he decided to parade the suspect to puncture the rumour that he had committed suicide while in a police cell.

He assured Nigerians that the police would do their utmost to ensure that justice is not only done but seen to have been done, stressing that the police cannot cover up any crime in the state irrespective of who is involved.