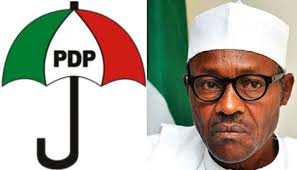 The Peoples Democratic Party (PDP) has submitted that President Muhammadu Buhari is not doing enough about the security and economic challenges facing Nigeria.

The major opposition party said Nigerians are hungry and dying under the watch of the current administration while the President continues to give excuses for his many failures.

The PDP made the submission in its reaction to President Muhammadu Buhari’s call on Nigerians to show more understanding as he vowed that his administration will deal with bandits to ensure that they do not create havoc against food production.

The President stated this while speaking to newsmen after observing the Eid prayer, marking the end of the month-long Ramadan fast.

He stated that the federal government and law enforcement agencies are working hard to regain confidence among Nigerians.

Speaking on the series of security meetings held in recent weeks, Buhari said part of the resolutions had been made public by the National Security Adviser and the others kept secret.

However, the PDP through its National Publicity Secretary, Kola Ologbondiyan in an interview with The PUNCH said Nigerians need more than excuses and rhetorical statements from the President.

Ologbondiyan said, “We note the appeal by President Muhammadu Buhari for Nigerians to show more understanding for his regime’s lethargic approach to governance. It is obvious his best is so far not enough; Nigerians are hungry and dying.

“We also invite him to also note that Nigerians are getting tired of an endless stream of excuses coming from his regime. He was elected to find solutions to problems not give excuses.

“We urge Mr President to wake up from his lethargy and address problems. Blaming the past has been the favourite sound bite of this regime since 2015. The other day, a minister was blaming the General Murtala Mohammed regime of 1975/’76 for Nigeria’s security problems. We can’t make progress this way.”