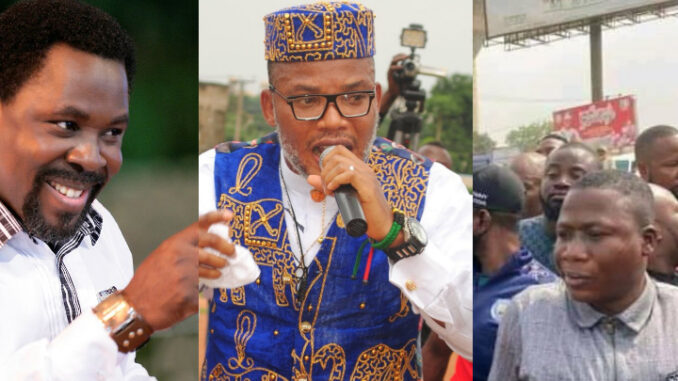 This is following the worsening case of insecurity occasioned by kidnapping, banditry, terrorism and general criminalities currently rocking the nation.

Addressing church members on Sunday, TB Joshua assured that Nigeria will not break up.

According to the popular prophet, though Nigeria would be covered by a cloud of “crisis, murder, killings, destruction” but would not disintegrate.

TB Joshua said: “I want to assure you, nothing will happen to Nigeria. Nigeria will remain one.

“Beyond this crisis, Nigeria is beautiful. Your prayer now is that you should witness it so that this crisis will not take you away.

“It is decreed that this nation will be reckoned with as a powerful nation.”

Meanwhile, the former lawmaker Representing Kaduna Central in the Senate, Shehu Sani, has disclosed that agitators are calling for the breakup of Nigeria because of bad governance under the leadership of President Muhammadu Buhari.

Sani further stated that Nnamdi Kanu and Sunday Igboho were once believers in one Nigeria before the government became bad.

He added that as long as poverty, corruption and bad governance continued to grow and failure of government became apparent, the bandits and terrorists ravaging the country would also not drop their arms.

He stated these on Thursday in Abuja at a symposium titled, “Minimum wage, Unresolved National Question and Insecurity In Nigeria” organised by the Movement for a Socialist Alternative, Take It Back Movement, the Committee for Defence of Human Rights, the Socialist Party of Nigeria and the Democratic Socialist Movement, among others.