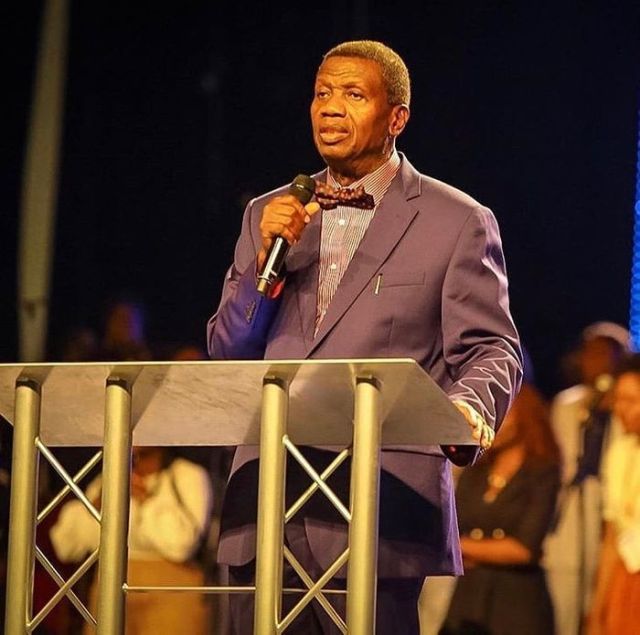 The General Overseer of the Redeemed Christian Church of God, Pastor Enoch Adeboye, on Thursday evening, made his first public appearance after the death of his 42-year-old son, Pastor Dare Adeboye.

The general overseer featured at the Holy Communion Service of the May Edition of the church’s Holy Ghost Service. The programme was themed, ‘Overflowing Blessings’.

The PUNCH had earlier reported that the younger Adeboye died in his sleep on Wednesday in Eket, Akwa Ibom State, where he was based with his family.

His death shocked the whole world as well-meaning persons including presidents, governors, and personalities condole the 79-year-old general overseer and his wife over the death of their son.

Preaching from John 6: 5-13 on Thursday night, the older Adeboye stressed on the importance of the bread and wine of the Holy Communion.

The cleric spoke from the studio of the church’s station, DOVE Media, while members of his church congregated in the auditorium along the Lagos-Ibadan Expressway and in other places across the world watched him.

Adeboye, in his sermon, said, “The bread multiplied in the hands of the disciples, as you receive the bread, it will multiply in your hands.”

Adeboye, who kept mute on the passing of his son, was visibly heartbroken and troubled.

After the sermon, the officiating minister in the auditorium said, “Tonight, daddy has prayed for us. He has also prayed on all the elements that we are going to use – the bread and the wine. I am here not standing in for him because I am too small to stand in for him; I am only here to deliver the message as a messenger. He could have been here physically as he used to but due to circumstances beyond control, he was not able to be here but to the Glory of God, he has said to us, Jesus is here and he is also there praying for us.”

Adeboye was not the first pastor to preach shortly after losing a loved one. Last year, the Senior Pastor of Trinity House, Ituah Ighodalo, ministered at a funeral hours after losing his wife, Ibidunni.