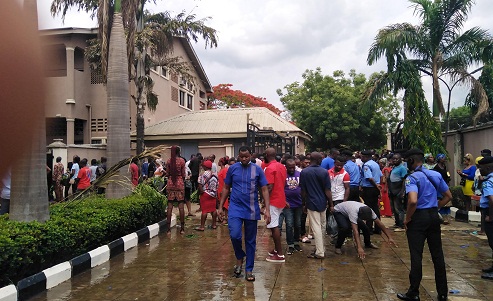 The residence of the Catholic Bishop of Enugu Diocese, Most Rev. Callistus Onagah, was on Wednesday destroyed by angry members of the Adoration Ministry in Enugu State.

The mob was protesting the alleged detention of the ministry’s Spiritual Director, Rev. Fr Ejike Mbaka, in the bishop’s house.

The protesters who chanted war songs destroyed the perimeter fence and window panes of the bishop’s house.

They were restrained from causing more damage by scores of security personnel who stormed the bishop residence.

The protesters had earlier gained access into the sitting room and destroyed furniture and other items.

The bishop’s guests’ house and Youth Corp member’s lodge adjacent to the bishop’s residence were not spared.

The PUNCH gathered that Onagah invited Mbaka for a meeting on Tuesday after Mbaka and other priests left.

It was gathered also that shortly after the meeting, Mbaka’s cell phones were reportedly switched off.

On Wednesday morning his phones were still not going, prompting his followers to raise the alarm.

The PUNCH reporter who went to Adoration Ground was attacked by overzealous members of the ministry.

They seized his phones before marching him to their security post.

An editor of the Authority Newspaper who intervened was equally detained for more than two hours.

The members, who surged to the security post, said, “Bring those useless journalists out let’s deal with them. If we kill them here nothing will happen.”

Before allowing the two journalists to go, one of the security operatives attached to Mbaka ordered two members of the ministry to delete all the video interviews and pictures he took at the ground.

See also  Atiku Faults CBN Shutdown Of Cryptocurrency Transactions...Check Out What He Has To Say

Although he did not state who arrested him, it was gathered that Mbaka was with the Department of State Services.

A security source told our correspondent that the DSS compelled Onagah to invite Mbaka to his house from where they arrested him.

However, when they saw the level of destruction visited on the bishop’s residence and the cathedral, they allowed him to make a video call to some of his supporters. They were said not to have been satisfied and were forced to release him.

Mbaka who indirectly confirmed his arrest by the DSS told his congregants, said, “Whoever went to Lion’s den; what is he looking for?

He said, “It is from the bishop that I came here, but I thank God that what was destroyed was big. If I told Buhari to change why should it be a crime? Have bishops not said so? Has Governor Umahi not said there is insecurity in Nigeria? Have priests and pastors not said that there was insecurity. And they want to stop Mbaka’s voice, voice of anointing.

“Unfortunately, some of those who attended that meeting, instead of keeping the secret, started talking. They said that they arrest the person that is threatening them, Adoration will be closed, Mbaka will be sent out. And the people heard it. so they caused their problem.

“What I want to you is that because you people have not forsaken me I will not forsake you.”

He said his bishop had asked him to go back to his ministry and continue his work.

He added, “What I want to tell people is that whenever there is message; instead of doing what was said, they will start fighting me. They will remain where they are fighting Mbaka and the message will come to accomplishment. If they want or they don’t want let them do what they ought to do. Look after the poor. Look after the youths. I don’t look for contract. Even if they report it to Pope I am ready to go there and defend it.

When Director of Communication, Catholic Diocese of Enugu, Rev Fr. Benjamin Achi was contacted on telephone he declined comment.

But Achi had earlier, in a chat with our correspondent, said the church was not aware of Mbaka’s disappearance, saying, “If Fr Mbaka is missing, it is the Church, Catholic Diocese of Enugu, that should alert the world that he is missing.”