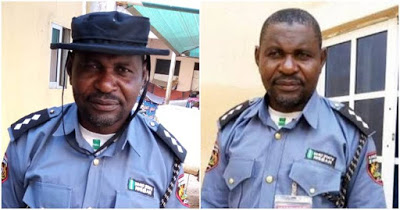 The Kano State Hisbah Board has sacked a top official of the agency, Sani Rimo, for sleeping with a married woman in a hotel room in the Sabon Gari area of Kano metropolis.

Rimo was arrested by officers of the state command after he was caught with a married woman in a hotel.

The development attracted reactions across the country due to the assignment of Hisbah which is to arrest unmarried people caught in hotels, presumably for sexual activities, as part of their enforcement of the Sharia

Confirming the sacking of the official to newsmen in Kano on Tuesday, the board’s Public Relations Officer, Lawal Fagge, said the decision to sack Rimo followed a report by a committee set up by the board to unravel circumstances surrounding the incident.

Before the incident, the official was said to be at the forefront of arresting prostitutes and other wayward girls and other women of easy virtue.

Recall that the communications officer of Hisbah, Nabahani Usman, had said the matter had been fully investigated by the police, and the officer was found innocent.

Rimo had gone to give his daughter some food at the hotel located in Sabon Gari when people sighted him and thought he was visiting his lover.

Usman had said, “The latest update on the case is that it was transferred to the police, fully investigated by the police and the outcome of their investigation is that the man is innocent of all the charges; the allegations were false. The lady is a daughter to him, there is a marital issue between the woman and her husband’s family so they had to lodge her in a hotel pending the time they would resolve the matter.”

“They didn’t even allow her family to reach out to her but her father got to know about it and was taking food to her in the hotel. When people say that a Hisbah official was going to the hotel, they started shouting that a Hisbah officer had gone to meet a married woman in the hotel and all that, without even knowing she is his daughter.”

“The man right now is devastated, he has filed a petition against Freedom Radio through his solicitors. They will have to pay N10 million in damages and he said they would have to retract the publication and offer a public apology to him. He might go after other media houses though but we are not sure yet.”