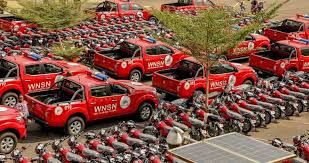 Residents of the Southwest states of Ekiti, Lagos, Ogun, Ondo, Osun and Oyo states are demanding more action from Amotekun, the regional security network, to check crimes in the zone, especially kidnapping and robbery.

Many of the residents believe that not much has changed in the area of securing lives and property since the take-off of the outfit last year.

Amotekun is in full swing across the geo-political zone save Lagos State where the Neighborhood Safety Corps is in charge with 7,000 personnel deployed across the state.

Operational heads of the security outfit admitted to The Nation that there is still a lot of work to be done by them but said they need appropriate and adequate equipment to live up to expectations.

The rate of kidnapping is particularly telling in Ekiti State where highways, including Igbara Odo- Ikere, Aramoko-Erio-Efon, Efon-Iwaraja, Akure-Ikere, Ado-Ijan, Ise-Ikere have become no go areas for the faint hearted because of the activities of kidnappers.

In the last few months, no fewer than 10 people have been gruesomely murdered in the state while scores were kidnapped by gunmen, including traditional rulers, government officials and other influential persons.

A traditional ruler, the Obadu of Ilemeso in Oye Local Government Area (LGA) of the state, Oba David Oyewunmi, was kidnapped from his palace on April 15 by six gunmen.

That was just a week after the Elewu of Ewu Ekiti, Oba Adetutu Ajayi, narrowly escaped being kidnapped on the Ewu-Ayetoro Road.

But while the two traditional rulers are alive to tell their stories, it is not so with the Olufon of Ifon in neighbouring Ondo State, Oba Israel Adeusi.

A community leader in Ekiti State, Mr. Abdullateef Omoboriowo, is not impressed by the performance of Amotekun in the state so far.

He says the resurgence of crimes in the state and unhindered operation of criminal elements have cast a pall on Amotekun Corps, expressing regret that despite the commencement of their operations, Ekiti people could not still sleep with their two eyes closed.

He wants Amotekun to go after kidnappers in every part of the state.

For the Convener, Igangan Development Advocates in Oyo State, Mr Oladokun Oladiran, it appears Amotekun has been under-performing.

“Going by the happenings in the state, it is crystal clear that Amotekun has failed in discharging its constitutional roles which is primarily maximum protection of lives and property,” Oladiran told The Nation.

He said: “They have performed below expectations of the people. When it was set up, many people thought it would help tackle the security challenges confronting us, but a year after, the reverse has been the case. Ekiti is currently under siege as people find it difficult to go to farm and travel.”

“They seem to be operating lower than their capacity and lower to their potential. Why? Why do we have all of these men? Why do we have all these human resources but they are not being fully explored in bringing security which they originally set out to achieve? That is the question.

“I have mingled with a lot of them; they are capable. Many of them are capable. They know the territories and are indigenous to the places they are posted to, while those that are not too familiar can always mingle with the old ones.

“The make-up and everything is good. Amotekun looks good on the blueprint but there is a problem: the FG has meddled in the set-up. Interacting with some of them, they lament woefully how they have been restricted, how they have not been recognized, and all of us can see it when we look at them.”

In his own assessment of the corps in Oyo State, the Secretary of Farmers (Akowe Agbe) in Ibarapa North Local Government Area, Oyo State, Mr Taiwo Adeagbo, said many members of the security outfit lack the requisite skills and knowledge of the environment in which they are operating.

He attributed this to alleged interference by politicians.

He also accused the operatives of highhandedness and unwillingness to synergise with other security operatives; a situation he said had led to their unproductiveness in taming the insecurity issues in the region.

Adeagbo said: “The issue is that local vigilance groups are better than the Amotekun in Ibarapa North Local Government. The local government vigilantes are far better and more responsive than Amotekun.

“When something happens and they call people to go there, the Amotekun Corps would just be foot-dragging. They are always disappointing us. You can confirm from the DPO in the area. In Ibarapa North, the Amotekun is not useful to anybody.”

He said government should recruit ‘real hunters’ into Amotekun.

“The hunters know all the bushes, forests and interior that no other person can thread, especially how they link together as communities which is an asset in combating crime.”

The Chairman of Amotekun in Oyo State, General Kunle Togun (rtd) and the Commandant Olayinka Olayanju (a retired Colonel) declined to talk to The Nation.

The Amotekun Commander in Ekiti State, Brig-Gen. Joe Komolafe (rtd), admitted that “pockets of crimes” have occurred in the state since the take-off of the security outfit, but he said, “We have cleared our forest of criminals.”

He added: “If you move around our major highways, you will see our men on patrol and we are arresting kidnappers in the forest and handing them over to the police for prosecution.”

One of the feats recorded recently was the arrest of three persons suspected to be members of a kidnap gang terrorising the state. The suspected kidnappers were arrested in Igbara-Odo in South West Council Area of the state following an abduction attempt on a woman along Erinjiyan-Igbara Odo Road.

“The suspects, namely Abubakar Musa, 25; Yussuf Lawal, 20 and a 30-year-old Babangida Usman, were handed over to the state command for prosecution.

Similarly, On January 22, Amotekun apprehended four persons suspected to be kidnappers. The suspects identified as Sheu Usman, Abubakar Babangida, Abubakar Sule and Sheu Mamuda, were arrested in Eda Oniyo, Ilejemeje Local Government Area of the state during a routine patrol of the security outfit.

Komolafe is optimistic that the corps could do far better than it is doing know if it is empowered with sufficient funds, firearms and modern equipment like drones for surveillance and tracking of criminal hideouts.

Komolafe added that it would be an impossible task for the corps to live up to the expectations of the people without bearing firearms, saying that the criminals unleashing terror on the state are armed with sophisticated weapons.

Funding is also said to be a major problem of Amotekun in Ondo State.

Its Commander, Chief Adetunji Adeyeye, told The Nation that without sufficient funds, it will be difficult for the corps to procure equipment for its personnel to perform optimally.

His words: “Our major challenge has to do with equipment. We need better tracking equipment. That is a challenge traced to funding.

“Funding security operations can be quite challenging. Governor Akeredolu is trying his best. We have procured vehicles and some working equipment but are looking forward to acquiring the latest tracking equipment.

“However, Governor Akeredolu has given directive that Security Trust Fund should be put in place. I think they are working on it. Security is everybody’s business. There is no economic growth without adequate security.”

But Adeyeye said logistic problems notwithstanding, the corps has succeeded in resolving over 500 reported cases between farmers and herders with compensation paid.

“We have been able to resolve a lot of issues,” he said.

“Before we came on board, armed robbery and other criminalities were the order of the day in Akure and other areas. Since we started Operation Clean Up, crime and criminality have come down. We took the battle to their hideouts and flushed them away. We have made all the difference.

“In intelligence gathering, we have our crew but we protect the integrity and identity of our field officers. We have our intelligence both voluntary and regular in every town in Ondo State.

“We were the first to start prosecuting cases. We have more than 17 cases than involved over 100 persons at correctional centres.

“We are pursuing our major goal, which is to complement efforts of other security agencies. Our response time to distress calls is short and swift.”

Garuba, who also hailed the Ondo Amotekun Corps for tackling crimes, said many herders now feel safe in the state.

And there is the case of Farmer Aishat Ali of Ero village in Ifedore Local Government Area.

Some cows had grazed on her farm and destroyed her crops just a few days before harvest.

She could not immediately identify the herders as they usually move between Kogi and Osun states.

Last month, the same herders were back in Ero community and entered Aishat’s farm. She quickly contacted operatives of the State Security Network who promptly arrested the herders and seized their cows.

Aishat is one of the over 500 farmers in Ondo State that Amotekun Corps has helped in the past one year to get compensation for the destruction of their farmlands.

Mr. Olaoluwa Meshack said the presence of Amotekun has put fears in criminals in the state.

Meshack urged the state government to buy more equipment for Amotekun operations to enable it tackle crimes before they are committed.

Abayomi Adesanya, a farmer in Yewa North Local Government Area of Ogun State, said the presence of Amotekun as helped in restoring a measure of confidence in that part of the state. But he also said it was too early in the day to assess the corps.

The Amotekun Commander, David Akinremi, a retired Commissioner of Police, appealed to Ogun residents and indigenes to be patient as the first batch of 120 Corps Operatives have just been deployed in six local government areas – Ipokia, Imeko – Afon, Yewa North, Sagamu, Ijebu – Ode and Ijebu North.

He explained that the training and deployment will keep coming in batches in conformity with the COVID – 19 protocols.

The Corps Commander of Osun Security Network, General Bashir Adewinbi, told The Nation that his team has done “wonderfully fine when it comes to the security of the state.”

He said: “During the period of COVID-19 when the government ordered a lockdown, we controlled the influx of people into the state.

“We contributed immensely in restoring peace when Ilobu and Erin Osun engaged in a communal clash. We were involved in rescuing kidnap victims and arrest of perpetrators.

“We have worked with the police, vigilance groups, hunters and others in ensuring the safety of Osun People. We were actively engaged during kidnapping at Ikire, killings in Wasinmi and others.”

It was gathered however that hunters in the state and members of the Oodua Peoples Congress (OPC) are not happy with the corps for allegedly shortchanging them each time they volunteer for operations.

Sources cited the rescue of seven members of the National Union of Road Transport Workers who were kidnapped at Iwaraja junction on the Ilesha/Akure expressway.

It was gathered that the OPC members had to pull out because no provision was made for their welfare.

Why Lagos is yet to have Amotekun – Sanwo-Olu

Governor Babajide Sanwo-Olu of Lagos State said recently that because of the “peculiar nature of Lagos” the state prefers to run what it calls Lagos Neighborhood Safety Corps, which is performing basically the duty of Amotekun in other parts of the Southwest.

“It’s just a name change in the case of Lagos,” he said on Channels Television.

He added: “I appreciate what my colleague governors are doing, and they also appreciate the peculiar nature of Lagos.

“I have got over 7,000 neighbourhood watch personnel in Lagos, who are doing exactly the same thing that we have Amotekun doing.

“They are there at the border post giving us daily monitoring in their localities and feeding it back to the central. They are the ones feeding us with information. But they cannot carry arms and prosecute people.”