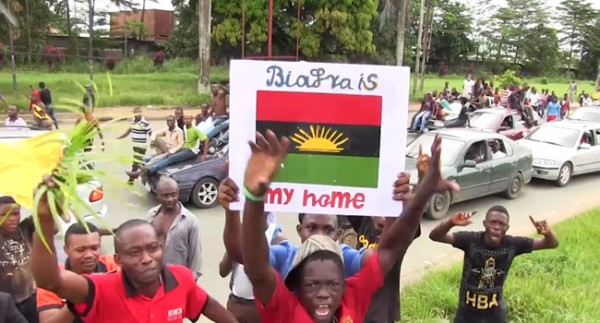 The Movement for the Actualisation of Sovereign State of Biafra (MASSOB) and proscribed Indigenous People of Biafra (IPOB) have ordered a sit-at-home on May 30.

But IPOB said its members in over 100 countries, including Lagos, Abuja as well as northern towns with reasonable population of its members are to also observe the sit -at -home

The pro -Biafra groups said the annual event in commemoration of its fallen heroes and heroines, would be observed in all markets, churches, banks, parks, airports and seaports within and outside the region.

These were contained in separate statements by IPOB and MASSOB by the Media and Publicity Secretary,Emma Powerful and Comrade Samuel Edeson, National Director of Information, respectively in Awka

The pro-Biafran groups said there would be no procession, protest or church services anywhere in the zone, urging members to stay indoors throughout the day.

IPOB said: “We the global family of the Indigenous People of Biafra (IPOB) ably led by our prophet and liberator of our time, Mazi Nnamdi Kanu, wish to announce to the public and Biafrans both home and abroad, that the annual anniversary of our fallen heroes and heroines will be on Sunday, 30th of May 2021.

“As usual, there will be total lock down of the entire Biafra land on that day. There will be sit-at- home across Biafraland, Lagos, Abuja as well as northern towns with reasonable Biafran population.

Read Also: Why UK may consider asylum for IPOB, MASSOB members
“The sit-at-home order is also to be observed in all the markets within and outside Biafra land where our people do their businesses. It shall also be observed by Diasporan Biafrans in the over 100 countries with the IPOB family is present.

“We equally request our fellow comrades in Yoruba, Middle Belt and other Christians living in the far North to solidarise with us in the event as we honour all those who have paid the supreme price in our struggle for total freedom.

“All Biafrans living overseas must hold rallies in their respective countries of abode in honour of our fallen heroes and heroines including the gallant Imo State Eastern Security Network, ESN, COMMANDER, Ikonso and his men murdered last week by the Nigeria security agents.

“The rallies will also show the outside world of our resolve and preparedness to leave Nigeria. We equally advise our Diasporan people to ensure they get the written approval of their host countries before embarking on the rallies.

“Consequently, there will be no movement on the roads throughout Biafraland; no banking or financial services in our territory; no commercial activities of any kind.

“There will be no procession or protest anywhere in Biafra land on that day. Everyone is to stay indoors, no church service on that fateful day” IPOB said

MASSOB said:”After our National meeting at MASSOB headquarters at Enugu, we have declared May 30th as Biafra day celebration.

“We can never change the ordinances of Dim Chukwuemeka Odumegwu Ojukwu, the leader of Biafra nation. Ojukwu declared the Republic of Biafra with the total consent and full support of the elders and the people of Biafra on May 30th, 1967.

“MASSOB has no intention or plan to observe our fatherland anniversary celebration on any other date except on May 30th because May 30th is sacrosanct and sacred to the history and lives of Biafra Republic.

See also  The Burial Date For Afenifere Leader, Fasanmi Has Been Set...See Details

“The ordinances of our great leader, General Chukwuemeka Odumegwu Ojukwu must be jealousy and eloquently adhered to, any attempt to change it by disgruntled persons will be strictly resisted.

“MASSOB, directs the people of Biafra to observe a special prayers and supplication for the fallen Biafra heroes during the Nigeria –Biafra war and our comrades that were killed by Nigeria security agents including the people of Biafra that died in the hands of Islamic Boko Haram and Fulani terrorist herdsmen.

“MASSOB directs all markets, schools, banks and all other public offices in Biafra land to observe the sit- at -home exercise as a mark of respect for our fatherland

“In spirit of brotherhood and Biafranism, MASSOB will collaborate with other Pro -Biafran groups that have unanimously agreed and resolved to jointly observe, commemorate and celebrate the 54 years anniversary of Biafra declaration by our foremost leader, Dim Chukwuemeka Odumegwu Ojukwu on 30th May, 2021.

“This year’s anniversary will be celebrated by the people of Biafra not as a pro Biafra group, it is a mark of respect and honour to our father land, it is also a reminder to the visions and commandments of our great ancestors that we are not Nigerians but Biafrans.

“We enjoin our people to get ready for the celebration of this great anniversary which will hold to remind ourselves to continue the self determination movement for Biafra actualization and restoration.”