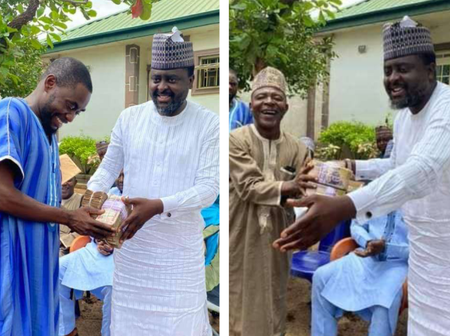 The lawmaker representing Suleja/Tafa And Gurara federal constituency in the House of Representatives, Hon Abubakar Lado Suleja has shared out N50m as Ramadan gifts to friends and associates.

It was learnt that the lawmaker brought the huge money in cash and distributed it on Tuesday to some of his political associates.

The money was reported not to be targeted at any empowerment scheme or economic project but the lawmaker requested photographers to capture the moments for him on camera.

However, a source quoted the lawmaker to have said the money is to show appreciation to his followers for their loyalty.

“Lado said It was necessary for him to pay loyalty with royalty. He said the money was to thank his people for their patience and loyalty. He said he particularly chose the Ramadan period to be able to repay them in full. The cash disbursements were given to beneficiaries as follows: N1million, N500,000, N300,000, and N200,000,” a source said.