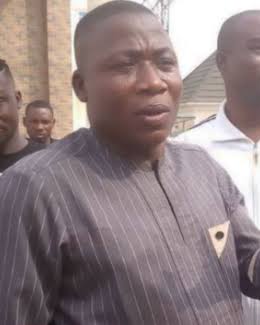 Dapo Salami, a close aide of the popular Yoruba activist, Sunday ‘Igboho’ Adeyemo, has revealed how some gunmen invaded the residence of his principal.

Earlier, the spokesman of the activist, Olayomi Koiki, had in a video on his Facebook page, said the gunmen invaded the home of Sunday Igboho located at Soka area of Ibadan in the early hours of Monday.

He claimed that the gunmen fired many gunshots when they invaded the house but were repelled by supporters of the activist.

Koiki, however, accused the federal government of masterminding the attack on Igboho’residence, adding that their group would shut down the whole Southwest today.

He stated that the federal government may think they are dealing with #EndSARS protesters, saying that today would be the beginning of the problem the Muhammadu Buhari government is waiting for.

However, speaking with reporters on Monday, Salami narrated how the gunmen stormed the residence.

Salami said that the gunmen invaded the house around 1.30 am on Monday, but were resisted by the occupants in the building.

“We are not suspecting anyone, but we know that some people came.

“They came and they were resisted, that is just it.”