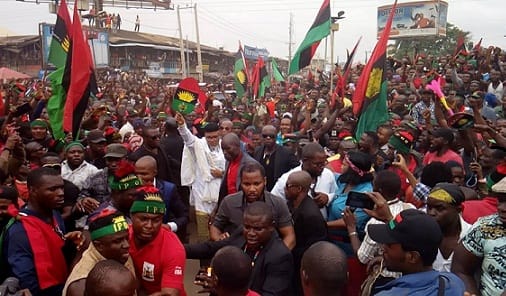 The Biafra Nations League, BNL, has alleged that the unknown gunmen attacking different locations in the South East are Fulanis being sponsored by some northern political leaders.

According to the group, the sponsors are trying to terrorize the South East.

Deputy National Leader of BNL, Ebuta Akor Takon, in a statement to DAILY POST on Sunday, said that the activities of some of the gunmen were suspicious, adding that the attacks on banks and stores in Anambra and Enugu were not part of the agenda of Biafra liberation.

The BNL lamented that “There is a plot to blackmail pro Biafra groups,” insisting that Biafra struggle is not about “armed robbery and looting of people’s property.”

According to BNL, “Miyetti Allah who were threatening to deploy 5000 Fulani security operatives to the East have already done that before their announcement.”

The group warned that ,”the violence in the South East and some parts of South South will not only affect the Biafra territory but would affect the neighbouring middle-belt of the northern part where they are taking refuge and recruiting to launch attacks.”

Reacting to the killing of a commander of the Eastern Security Network, ESN, Ikonso Don yesterday by a joint operative of the Nigeria Army, Police and the DSS, BNL said that “It is expected, the young man has paid his price for what he believes in, but the killing will not solve anything”.