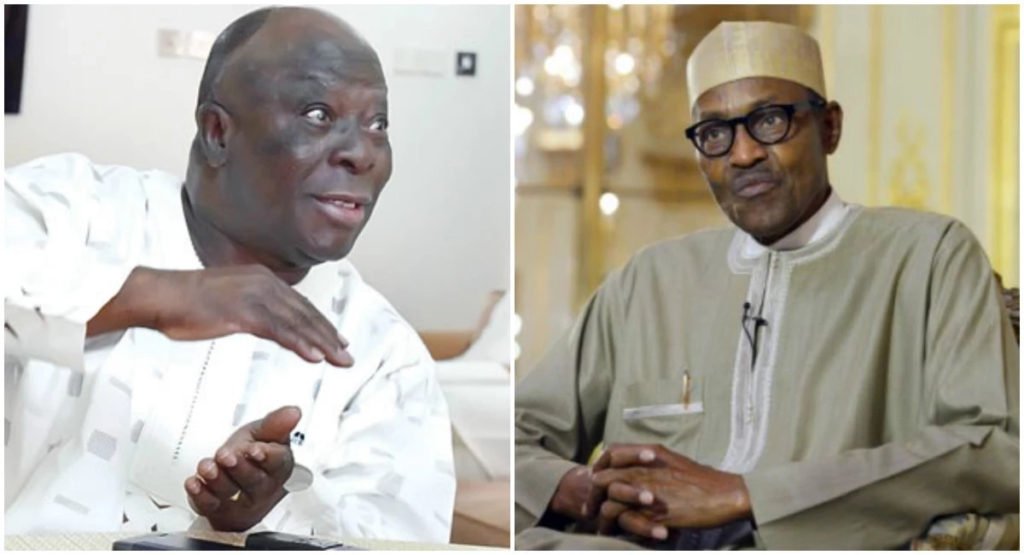 The leader of the Yoruba socio-cultural organization, Afenifere, Chief Ayo Adebanjo has accused President Muhammadu Buhari of having a hidden agenda.

According to the Afenifere leader, the refusal by President Buhari to take action on demands for the restructuring of the country shows he (Buhari) doesn’t have the best interest of the country at heart.

Adebanjo argued that Buhari and the All Progressives Congress (APC) are the enemies of the country’s unity.

He made the submissions on Wednesday during an appearance on Arise News.

According to him, both Buhari and his senior media aide, Garba Shehu have failed to address the demands for restructuring and calls to return Nigeria to true federalism.

The submission by the Afenifere leader follows an earlier declaration on Tuesday by Shehu that the Buhari administration won’t shift ground on its position that the oneness and unity of Nigeria is not negotiable.

Shehu had fired at those leading calls for secession by various groups in the country noting that President Muhammadu Buhari is not someone that can be intimidated or bullied into giving in to their demands.

The federal government also accused those calling for a secession of fighting for their own personal gains and pockets only.

But reacting on Wednesday, Chief Adebanjo said both Buhari and Shehu have failed to address the main points raised by the agitators.

He said: “The problem we are having in the country now is because of this constitution, people should get that clear. It appears both Garba Shehu and his boss, Buhari they don’t address the question.”

“I have said that this constitution is a fraudulent constitution. It is not the constitution we agreed to at independence. This unitary form of government with all its imperfections and impositions which has enslaved the south to the north was imposed on us by the military, and Garba Shehu and Buhari have not addressed that question.

“That is why I say Buhari and the APC are the number one enemy of Nigerian unity if they refuse to restructure the country back to federalism.”

Mr Adebanjo also noted that the current constitution being run in Nigeria is one of the major causes of problems in Nigeria.

Making allusion to the 2023 presidency, the Afenifere leader noted that the situation where a particular region would be dictating leaders in the country is no longer acceptable.

He called for a total review of Nigeria’s constitution which he said must be done before issues about the forthcoming 2023 general elections can be discussed.

In his words, “We are very definite in Afenifere, we are not prevaricating. The question of (2023) presidency now for us does not arise. This country is in pieces now, until that one is done then we can talk about where the presidency will go.

“The presidency will go to where the constitution provides. We are not going to do another election or be in this country where a section of the country will be dictating to us who will be the president at his grace.

“That is why we don’t believe in any election now until this constitution is scrapped and the new one will be principled on federalism and strictly observed.

“… We are seeing the deceit in the Buhari government trying to do an election. An election now is a diversion with this confusion in the country, security bad, economy bad, education bad, there is a state of flux in this country.

“We don’t believe in any election now until the question of the country is settled peacefully.”