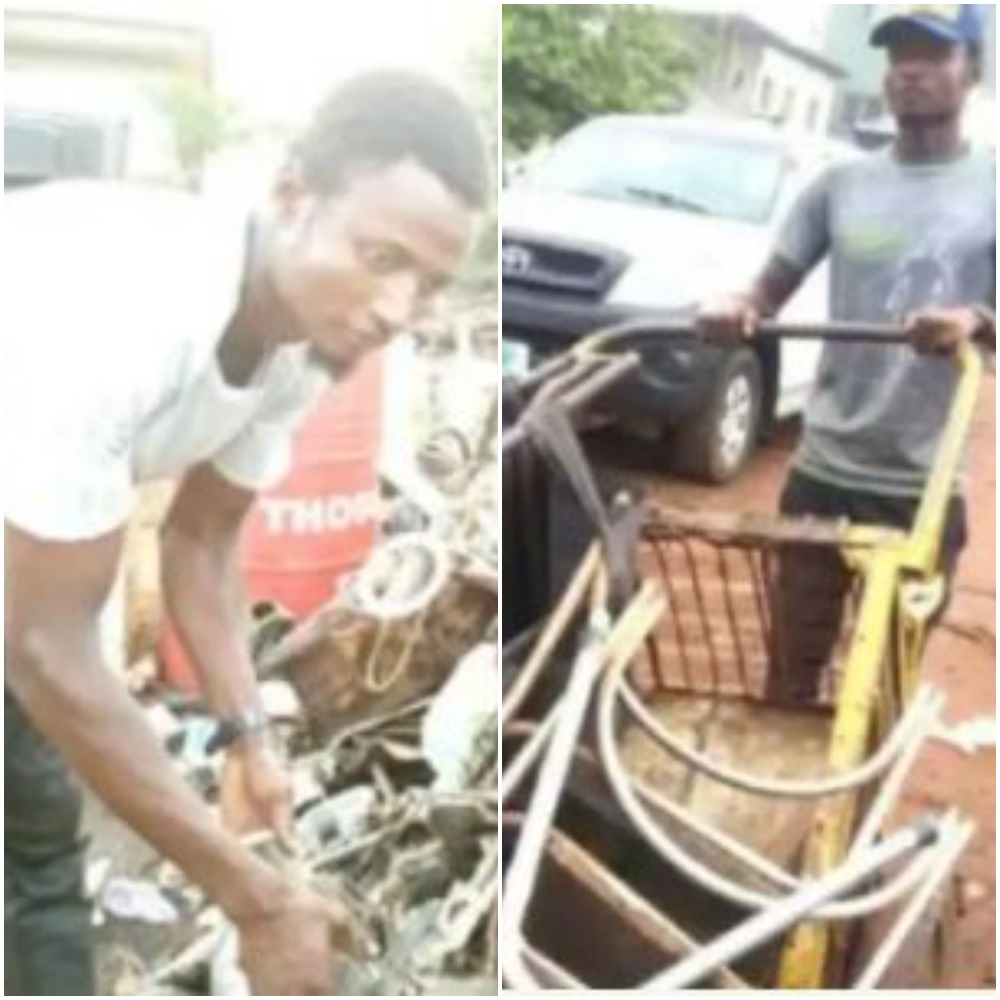 Nigerian Master’s degree, Yazid Surajo has revealed why he opted to become a scavenger after attaining his level of Education.

Yazid Surajo went viral after he posted pictures of himself carrying some scrap and copies of his certificates saying ‘It’s better to die on your feet than to live on your knees, I would rather be dirty and satisfied than clean and hungry’.

In an interview with a popular News paper, Yazid Surajo revealed how he was able to study to Master’s degree level despite the challenges he encountered.

How did you find yourself in the scrap business?

”It is obvious that if you want to achieve something good in life, at least you have to be dedicated and self-determined.

When I concluded my national youth service in 2016, I made a decision of not to stay idle. Many of my childhood friends used to go to Lagos, so I didn’t hesitate to join them.

Some said I was not fit for the business because it required energy and it was stressful. Those that knew me well and my attitude knew that I could withstand all the challenges that I found myself into.

We have a master called Dandogo, we are about 70 under him, everyday he will give each of us money to go out and look for scrap.

Some may be given N7,000, some N10, 000, some up to N30,000, depending on capacity. After collecting the money, everyone will take his truck and push it around in search for scrap to buy.

If you come across an item to buy which exceeds your money, you call your master to send you more money, and in the evening, everyone will go back to his master to upload the items he has purchased, measure it and the master will take out his money and give you back your gain. This is how we do the business on a daily basis.

After a year or two, I became used to that business. I gave it more attention because I realised that securing a job in this country is something that needs connection, because I have been applying for different government jobs but to no avail.

I applied for Nigerian Army, Navy, and Air force. I also applied for Nigerian Security and Civil Defense Corps, Nigerian Immigration Service, Customs Service, Fire Service, Correctional Service, Nigerian Police, and the recent one that I applied was National Drug Law Enforcement Agency NDLEA which they called me for an aptitude test and up till date, I have neither received a message nor heard about anything about the test.

When I realised that getting a job is something else in this country, I gave my venture more attention, and I have seen many benefits in it.”

Are there any challenges you face during the business?

”Indeed there are lots of obstacles faced during scrap business. It is like other businesses that go with some benefits and obstacles.

In the first place, one has to be careful of where to enter; when to enter; how to enter; and whom you will buy the condemned iron or any electronic object from.

In Lagos, they call us aboki or mallam, and we may fall victim of buying stolen items, which may lead to arrest or even imprisonment. In most cases, we get beaten, harassed, and interrogated.”

”I was born and raised in Karofi town of Dutsinma Local Government Area of Katsina State. I started my primary education at Karofi Model Primary School from 1996 to 2002. From there, I moved to GSSS, Karofi, from 2002 to 2008.

It was in 2008 that I got admitted at Hassan Usman Katsina Polytechnic, Katsina, where I began with IJMB and later got to study for a diploma. It was when I was in ND two that I got another admission at Umar Musa Yar’adua University, Katsina, to study History.

And my father advised me to drop the diploma course and go for the degree. I tried to convince my father to allow me to conclude my diploma before moving to any other programme, but he insisted that I must leave that diploma to accept that admission.

He added that “If you insist on rejecting that degree admission and continuing with the diploma, I will disown you.” So with that I complied and accepted the admission for my first degree from 2010-2014.

The reason for my refusal to accept that admission initially was that my father who was a police officer was on a sick bed, and I had seen his condition then. He was battling with hepatitis and that deadly ailment led to his departure.

He died as an inspector of police. But since his departure on 3rd December, 2010, we were unable to have access to his entitlement till after 10 years which was in December 2020 when the Police Service Commission released the entitlement of 3.5 million to us, which was half of his entitlement.

We suffered a lot to see that we got that entitlement in time because of the hardship that we fell into. Some personnel duped us before getting that sum at the end.”

How did you manage to study up to Master’s degree level?

”After the successful completion of my first degree and my youth services in Osun State, I began to think of my next step. In that process, I was considered among the batch A of N-power beneficiaries under the National Social Investment Programme which ended in 2020.

The federal government under this programme promised all the volunteers that they would be provided with government jobs, but that promise was not fulfilled.

They also promised all the volunteers an exit package in the sum of five hundred thousand naira to kick start a business, but that promise too has not been fulfilled. I later moved to Lagos where I ventured into the scrap business.

It was later in 2018 that I decided to continue with my education. Many people began to express their opinions on the decision, but after all, I was offered admission to study for a Master’s degree in Development Studies at Bayero University, Kano.

When the admission letter was issued to me, because of the economic situation then, I didn’t have the financial capacity to pay for the acceptance fees, not to talk of registration.

But because I was determined to further my education, I managed to sell my only plot of land. With the help of one of my friends who knows my keen interest in education, I got a buyer of the land, and so it happened. I paid for the registration and managed to continue with the programme.”