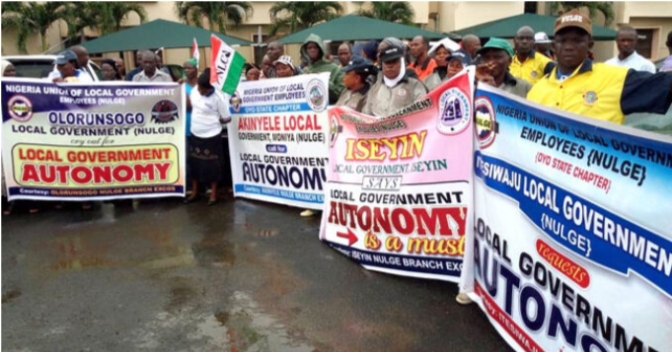 A bill seeking to scrap the local government (LG) system in the country has been kicked against by the Nigeria Union of Local Government Employees (NULGE).

Recall that a member of the house of representatives, Solomon Bob had in December sponsored the bill to remove the third tier of government from the constitution.

Bob had asked that the LGs creation, powers and funding be vested exclusively in the state house of assembly “in accordance with the principle and practice of true federalism”.

He argued the bill will go “some good way towards fixing the many centripetal anomalies in the 1999 constitution”.

Reacting, Ambali Olatunji, NULGE president, described those calling for the scrapping of local councils as enemies of Nigerians and democracy.

He said those behind the plot were insensitive to the plight and governance needs of the majority of Nigerians in the rural areas.

He said the NULGE is planning to occupy the homes of all federal lawmakers over the plan to scrap the local government system, warning that the sponsor of the bill and other lawmakers, who showed support for it, would face the wrath of the workers.

Olatunji said if the bill is not killed immediately, the workers would in the next few days stage a protest at the national assembly, after which they would storm the country homes of all members of the parliament.

“Our existence is being threatened; we will not sit down and watch. There will be a national protest there at the national assembly,” he said.

“They are no longer representing us, they are representing themselves. Bob Emmanuel, who benefited from the local government system, has now become so disillusioned that he wants the system scrapped.

“He is a member of the Peoples Democratic Party (PDP) and that is why we have asked the party to call their son to order. Any person who attempts to kill the local government system is killing his own political future.

“No lawmaker, who is on the side of the masses should join this destructive move. We shall fight them all.”

The NULGE president urged governors who believe the LG system to speak out against the plan to “destabilise a system that draws government closer to the people”.