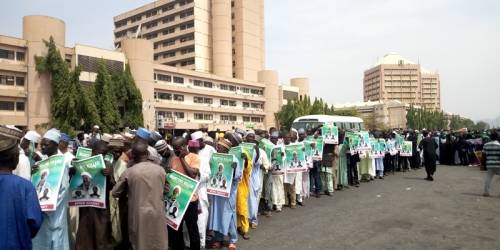 It cited the example of the leader of the sect, Sheikh Ibrahim El-Zakzaky, whom the court had set free more than once but still being detained by the government.

According to SaharaReporters, the South-West members of the Islamic Movement in Nigeria, popularly known as Shiites on Sunday alleged that the Nigerian government was empowering terrorists with millions of dollars to destabilise the country.

The group also faulted the Nigerian government for not honoring the rule of law.

It cited the example of the leader of the sect, Sheikh Ibrahim El-Zakzaky, whom the court had set free more than once but still being detained by the government, while asking Nigerians to make sure that El-Zakzaky regains his freedom in line with the rule of law.

The regional coordinator of the sect at a press conference after its interfaith symposium to allow religious leaders across Muslim and Christians lines discuss how to have an enduring peace in Nigeria, held in Ibadan on Sunday, decried the alleged killing of their leader’s six sons and over 1, 000 of his followers.

The South-West Coordinator of Islamic Movement in Nigeria, Alhaji Muftau Zakariyah, who addressed the press conference asked the government to consider the outcome of the court and set El-Zakzaky and his wife, Zeenat, free.

He said, “The only thing capable of saving our country today is the observance of the rule of law. If citizens could go to court and seek redress, if the police would go after criminals and prosecute them, then citizens would not revert to self-help and jungle justice.

“Today, the government has failed to project Shiites as terrorists, they have failed to prove that we have ever attacked anyone. On the contrary it is the Muhammadu Buhari administration that is seen blatantly romancing terrorists.

It is this government that is giving amnesty to known terrorists.

“It is this government that is empowering terrorists with millions of dollars of Nigerian assets.

“Anyone that is seen using power to enrich terrorists shall face prosecution in the future.

“Finally we are advising the government and all people of conscience to make sure that our leader is released according to the rule of law.

“Since Cain killed Abel, the world has always in trouble, when we refuse to be our brothers keepers.”

Speaking on several judgements which have vindicated their leader, the group said, “In 2017, (a) competent court in Abuja gave a judgment that the Nigerian government must release him and his wife, Mallama Zeenah and compensation of N25 million each be paid and a house anywhere he wants in Nigeria. Since, the court order has been disobeyed.