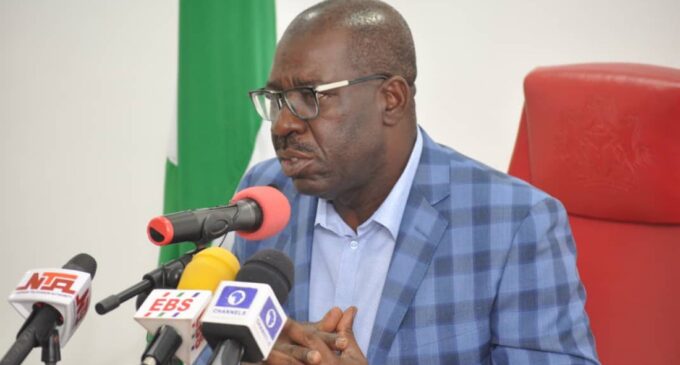 Governor Godwin Obaseki of Edo State has said that the federal government printed N60 billion as part of federal allocation for March.

Speaking at the Edo state transition committee stakeholders engagement on Thursday, the governor said Nigeria is in huge financial trouble.

Recall that the National Bureau of Statistics (NBS) said Nigeria’s total public debt stock as of the third quarter of 2020 (Q3 2020) rose by N6.01 trillion within a year.

But according to Obaseki, the economy is no longer what it used to be due to the rising debt profile is worrisome as dependence on crude oil is no longer sustainable.

He said: “Nigeria has changed. The economy of Nigeria is not the same again whether we like it or not. Since the civil war, we have been managing, saying money is not our problem as long as we are pumping crude oil everyday.

“So we have run a very strange economy and strange presidential system where the local, state and federal government, at the end of the month, go and earn salary. We are the only country in the world that does that.

“Everywhere else, government rely on the people to produce taxes and that is what they use to run the local government, state and the federation.

“But with the way we run Nigeria, the country can go to sleep. At the end of the month, we just go to Abuja, collect money and we come back to spend. We are in trouble, huge financial trouble.

“The current price of crude oil is only a mirage. The major oil companies who are the ones producing are no longer investing much in oil. Shell is pulling out of Nigeria and Chevron is now one of the world’s largest investors in alternative fuel, so in another year or so, where will we find this money that we go to share in Abuja?”

He expressed worry that the country has continued to borrow despite unclear means of refunding payments, urging the government must live up to its social contract with citizens.

He said: “When we got FAAC for March, the federal government printed additional N50-N60 billion to top-up for us to share.