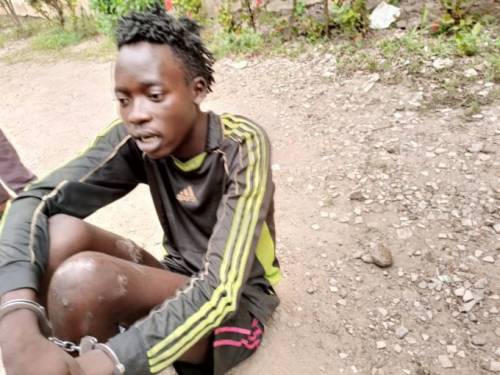 He disclosed this while responding to questions from journalists at the Osun state police command headquarters in Osogbo.

Muhammed Hammed, a suspected kidnapper, has said that he was recruited into a kidnapping gang at a beer parlour by some Fulani in Ibadan, Oyo State, according to SaharaReporters.

He disclosed this while responding to questions from journalists at the Osun state police command headquarters in Osogbo.

Hammed, who was arrested after kidnapping two persons at Wasinmi, spoke in Hausa language, saying it was his first job after he was enlisted into the gang.

He said, “I met some Fulani guys at a beer-drinking joint in Ibadan. They told me there is a business they run along the Ibadan-Ife Expressway and I was asked to join.

“We blocked the expressway, stopped a car and abducted two of the passengers into the forest. I was caught because I didn’t know the bush path very well and I got lost.

“The Fulani guys include one Alhaji, Buba, Siraju, Sodiq, and Seidu. I can’t recall other names now.

“I have never been a member of Boko Haram, I am from a village in Tambuwal local government area of Sokoto state and I was wandering around Ibadan before I met the Fulani guys that recruited me.

“It was destined that I would be caught because it was my first operation with them, though from what they told me, it was their usual job.

“I know I had been caught by the law, I don’t know what awaits me, but I wish the government can forgive me and give me another chance. I have never killed anyone before, this is my first act against the law.