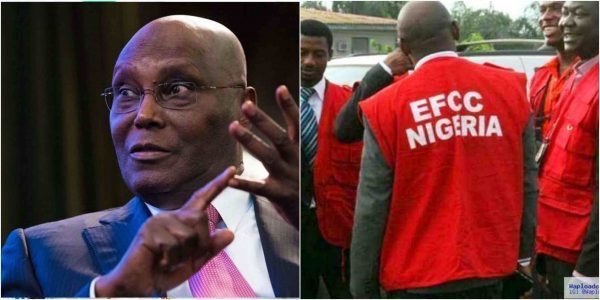 Former Vice President of Nigeria, Alhaji Atiku Abubakar has alleged that many of the cases being handled by the Economic and Financial Crimes Commission (EFCC) under the administration of President Muhammadu Buhari are politically motivated.

Atiku made the submission in a statement on Friday where he reacted to the appeal court ruling which freed the founder of Daar Communications (Ray Power and AIT), Chief Raymond Dokpesi of charges brought against him by the EFCC in the N2.1bn arms deal involving former National Security Adviser, Col Sambo Dasuki (rtd).

It will be recalled that the Court of Appeal sitting in Abuja on Thursday, upheld the no-case submissions made by Raymond Dokpesi and his organization, Daar Investment, and Holding Company Limited.

A three-man panel of the Court of Appeal upheld the two appeals by Dokpesi and his company, thereby setting aside an earlier ruling of a Federal High Court, Abuja, which rejected the no-case submissions made by the appellants.

While reading the judgments of the Court of Appeal, Justice Elfreda Wiialims-Daudu held the prosecution did not make out a prima facie case against the appellants and did not also establish the elements of the offences charge to warrant the appellants to be called upon to enter defence.

The appellate court thereafter proceeded to set aside an earlier ruling of the Federal High Court.

Reacting to the judgment of the appellate court, Atiku in a statement on Friday signed by his media aide, Paul Ibe, expressed his joy and solidarity over the acquittal of Chief Dokpesi.

He said the judgment revealed the truth about the lopsided nature of the anti-corruption policy of the Buhari administration.

According to the Atiku, “the entire anti-corruption trials appear to be focused on opposition politicians, thereby casting doubts on the credibility of the anti-graft agency.”

The former Vice President recalled that “during the 2019 presidential election, the EFCC focused its time and resources on harassing and arraigning aides of opposition politicians, while it was indifferent to how members of the ruling party were financing their campaigns.”

“The former presidential candidate of the PDP noted that even members of the international community are now coming to terms with the reality that the anti-corruption crusade is not impartial, and that the government is now using the anti-corruption policy to contrive charges against those they want to use to advance certain political objectives.”

Atiku further urged the newly appointed EFCC boss, Abdul Rasheed Bawa to learn from the mistakes of his predecessors and reposition the EFCC.

“As a young man of great intellect and confidence, I’m confident that you are up to the task. You must be ready to restore the glory of the EFCC by changing its public perception as a political tool of the government in power. Let your conscience and history judge you. But you can only do so if you resist external manipulation. May Allah guide you aright,” Atiku told Bawa.

Meanwhile, the Department of State Services has allegedly arrested a trader identified as Peter Onyuike and handed him over to the police for allegedly assaulting the CCT Chairman.

But the FCT police command is yet to arrest the CCT Chairman, Danladi Umar, who was spotted in a video allegedly assaulting a security guard, Clement Sargwak, around Banex Shopping Plaza, Wuse 2, Abuja, on Monday.

A document spotted by Punch revealed that the police are investigating traders for criminal conspiracy, joint act, assault, criminal force, and mischief.