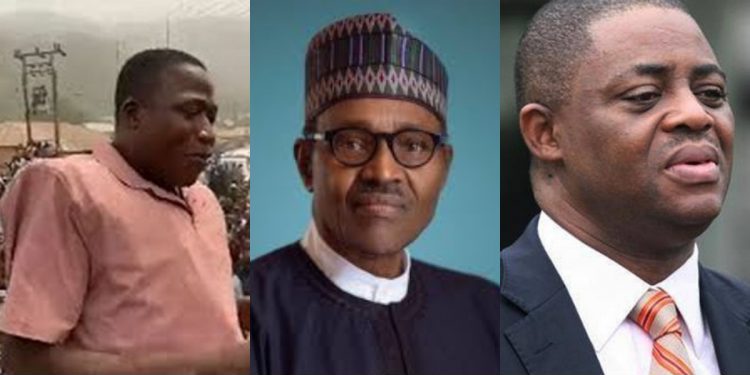 Fani-Kayode, who is a former Aviation Minister, made this known in a lengthy post on his Twitter page pon Friday morning.

According to the PDP, some south-west politicians who are jealous of Sunday Igboho’s rising profile are also behind the plot to silence him.

Fani-Kayode insisted that the Yoruba activist has committed no crime in agitating for Oduduwa Republic, adding that Igboho was instrumental in ending the food blockade that rocked the nation.

While warning that arresting and killing Sunday Igboho would lead to war, Fani-Kayode pointed out that the Yourba freedom fighter has become the biggest thing to happen to the South-west since Oduduwa.

I will say this just once. The biggest threat to the peace & stability of Nigeria today is the plan by some hardliners in the Buhari regime to kill, arrest or detain my friend and brother Chief Sunday Adeyemo (aka Sunday Igboho).

Arresting, detaining or killing this man will be the biggest mistake that the Buhari Govt. can make. I say this because firstly, as far as I am aware, he has not broken any law & secondly because he represents the thoughts & aspirations of over 70 million Yoruba people.

To every single one of those people he is the greatest hero of the SW since Oduduwa. Equally relevant is the fact that he has made a pledge to keep the peace & has honored that pledge & commitment by participating & playing a key role in the biggest post-war peace deal in Nigerian history in which he single-handedly guaranteed the safety of innocent Hausa Fulani’s in the South West and even offered to protect & receive them after the food embargo on the South was lifted & when the Northern food suppliers refused to come South.

Without Igboho’s guarantee of safety for the northerners the embargo would never have been lifted & a major conflict would have ensued. I know because, together with Governor Yahaya Bello of Kogi state & others, I was deeply involved in the negotiations.

There was also a plan to attack Southerners in the North (which would have resulted in a massive retaliation in the South) by a powerful, well organised Northern group but this was dropped after Igboho gave his guarantee & committed to peace with those that come in peace & live in peace in Yorubaland.

This man SAVED both northern & southern lives by this single action & has refused to join others in attacking innocent Hausa Fulanis in the SW. Instead, he has focused on defending the Yoruba people & protecting them against the homicidal & violent Fulani terrorists that are launching daily attacks against them from the forests of the West.

For this he is loved and reverred by our people and neither will any self-respecting Yoruba person offer an apology. This is a matter of self-defence & Igboho has consistently carried out these heroic operations in conjunction & collaboration with the local law enforcement agencies.

That is why millions love and admire him: he has done what the FG has failed to do and provided security for our people. To kill or arrest such a man who has committed no crime & who millions all over the SW love & would gladly die for is a dangerous, reckless and self-desructive course to take. And neither should his belief in the establishment of an Oduduwa Republic attract such aggression because he is simply reflecting the views and voicing the aspirations of millions of Yoruba people.

If the FG has an issue with Sunday Igboho my counsel and advice is to dialogue with him and attempt to build bridges of peace and understanding rather than attempt to arrest or kill him or wage war against him. He is not a murderer or a terrorist & neither has he breached. any law or committed any offence. All he has sought and fought for is peace and security and the protection of his people against foreign invaders and killers who have occupied our land and who the Federal Government have been unable or unwilling to uproot and eradicate.

Those identifiable individuals from the SW that are jealous of Igboho’s rising profile and that have urged the Federal Government to kill or arrest him are the real enemies of the Buhari administration. They are also the enemies of the people of the South West and Nigeria.

Arresting or killing Igboho will not help these people achieve their political objectives & aspirations. It will only make it impossible for them to do so & attract unprecedented hostility, opprobrium and notoriety to them. Treachery and betrayal comes with a heavy price If anyone doubts that they should find out how Judas Iscariot ended. Peaceful co-existence with those we may not like or agree with is the only option we have as a people if we do not want another civil war. Building bridges of peace & fraternity even with those we may be opposed to is the best way forward if we wish to avoid an armed conflict.

The greatest threat to our peace is for anyone to believe that the arrest or elimination of Igboho will not have serious consequences. This would be a grave miscalculation on the part of those who are contemplating it and would lead us down the road of turmoil, conflict, chaos and mutually-assured destruction. I pray that good sense prevails and that we avoid that road.