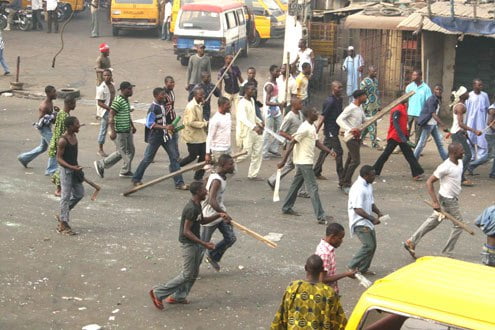 Hoodlums suspected to be political thugs have attacked Olateju Adunni, an aide to the Minister of Interior, Ogeni Rauf Aregbesola at a birthday party in Osogbo on Sunday night

The thugs specifically went to the firewood lounge, the venue of the party to look for Adunni and his friends at a party in Osogbo.

Speaking to reporters on Monday, former state councilor, Rasheed Ropo, confirmed the incident, saying that the hoodlums came to the party venue on an 18-seater bus and disrupted the birthday party organised by a lawmaker in the state, Hon. Taofeek Badamasi.

He disclosed that the thugs attacked Teju and Badamasi before they managed to escape.

He narrated: “We were attending a get-together to celebrate the birthday of Honourable Taofeek Badmus, the lawmaker representing Osogbo State Constituency. Badmus invited us. We met some lawmakers, Hon Festus Komolafe, a.k.a BFK, Honourable Babatunde Desmond Ojo from Oriade State Constituency at the venue. We dined and wined for hours.

“When we were about to leave the restaurant, we saw some thugs alighting from an 18-seater bus. We quickly retreated to the restaurant to avoid being attacked because of circumstances around the state.

“The thugs came in and shouted ‘That’s Teju, That’s Teju’. They started descended on him. Hon Taofeek Badmus was punched and he managed to escape instantly. While the hoodlums were attacking Teju, myself, Kehinde Adedeji, Wale Omolola and Dare Ogundotun attempted to rescue him.

“They shifted attention to us and they started attacking different people. Alhaji ‘Simple’, an elder brother to Senator Ajibola Basiru who is representing Osun Central Senatorial District was also attacked in the process. He was cut with a cutlass on the head before we managed to escape from the scene.”

However, a source at the lounge told Vanguard that claimed that nobody was attacked inside the lounge, but admitted that there was a fight outside which never got into the lounge.

He added that the police arrived at the venue on time to put the situation under control.