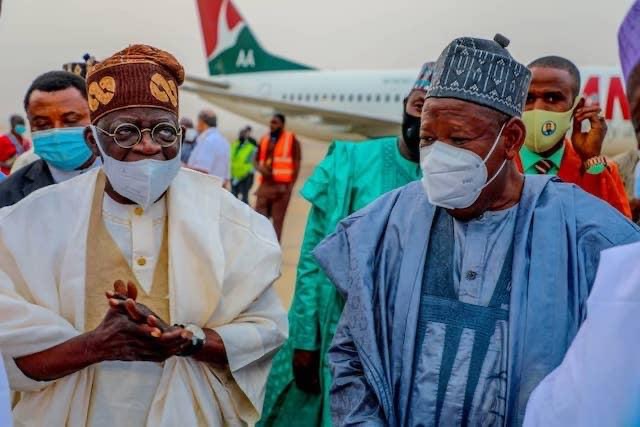 The 12th Bola Tinubu Colloquium, an annual high-powered policy roundtable, will be held in Kano on Monday.

The colloquium will mark the 69th birthday of the national leader of All Progressives Congress (APC), Bola Tinubu.

It will be the first time it will hold outside Lagos or Abuja, P.M Express reports.

President Muhammadu Buhari is expected to chair the virtual event.

Other eminent personalities including Vice President Yemi Osinbajo, governors, senators, ministers, political leaders, and federal lawmakers, among others, will grace the virtual summit.

The details of the event showed that the 12th colloquium will focus on the theme: “Our Common Bond, Our Common Wealth: The Imperative Of National Cohesion For Growth And Prosperity.”

The event is expected to start by 12 noon.

Ahead of the colloquium, Tinubu arrived in Kano on Saturday, after chairing the 11th Arewa House lecture in Kaduna, delivered by Governor Simon Lalong.

The APC leader came along with the former National Chairman of APC, Chief Bisi Akande, and other dignitaries.

The Tinubu Colloquium was conceived in 1999 by Tinubu’s close friends and associates, who felt that some of the very rich and stimulating intellectual debates that hallmarked some of the meetings at which he presided should be translated to a platform that would expand the conversation and lead to tangible outcomes.

The last edition was held in 2019 in Abuja with the theme, `Next Level: Work for People.’

The theme for the 2018 edition was: “Investing in People” while that of 2017 was centred on “Make it in Nigeria” which provided an avenue to examine critically how Nigerians can look inwards and use what they produce while also ensuring that they produce what they use.

At the 8th edition which took place in Abuja in 2016, the theme was Agriculture: Action, work, revolution while in 2015 at the seventh edition, the organizers chose change: How it will work”.