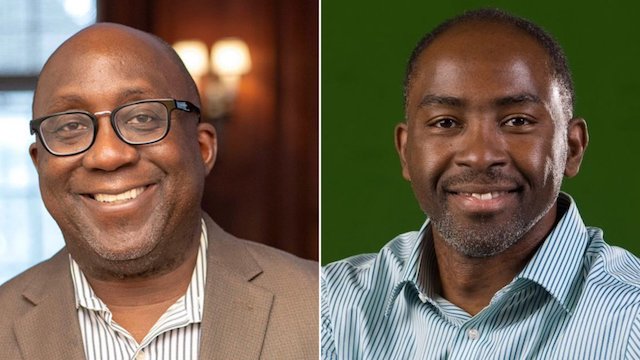 Two Nigerian-Americans, Oyekunle Olukotun and Oluwole Winston Soboyejo have been elected into the prestigious U.S. National Academy of Engineering.

The U.S.Mission in Nigeria drew attention to their achievement in a tweet congratulating them.

“We congratulate Nigerian-Americans Oyekunle Olukotun and Oluwole Soboyejo for their election to the prestigious @theNAEng of the U.S.A.

“They were elected based on their outstanding contributions to engineering research, practice, & education”, the U.S. Mission said.

Olukotun and Soboyejo were among the 104 new members and 24 international members, announced NAE President John L. Anderson on 9 February.

Olukotun is a professor of electrical engineering and computer science at Stanford University in California.

He was elected based on his contributions to on-chip multiprocessor architectures and advancement to commercial realization.

His election followed his contributions to the understanding of dynamic behaviour of materials and for leadership in STEM outreach in Africa.

Soboyejo was born in 1964 to academic parents in Palo Alto, California, USA in 1964. He moved to Nigeria with his family in 1965. Wole is the son of Professor Alfred Sobojeyo of The Ohio State University and Anthonia Soboyejo.

He returned to the United States in 1988 to become a research scientist at The McDonnell Douglas Research Labs in St. Louis, Missouri.

In 1992, he worked briefly as a Principal Research Engineer at the Edison Welding Institute before joining the engineering faculty of The Ohio State University in Columbus, Ohio, kicking off a full time engagement with academia.

Olukotun Oyekunle Ayinde “Kunle” Olukotun was born in London, but educated in the U.S.

He earned his first degree at Calvin College, in Grand Rapids, Michigan. He then got his Masters in 1987 and PhD in 1991 from University of Michigan, in Computer Science.

He joined Stanford’s department of electrical engineering in 1991, after his education

Olukotun is now the Cadence Design Systems Professor in the Stanford School of Engineering.

He is a Professor of Electrical Engineering and Computer Science at Stanford University and the director of the Stanford Pervasive Parallelism Lab.

Olukotun, who holds 12 U.S. patents, is known as the “father of the multi-core processor”, and the leader of the Stanford Hydra Chip Multiprocessor research project.

Olukotun joined Stanford’s Department of Electrical Engineering in 1991. In 2000 he founded Afara Websystems, Inc., a company that designed and manufactured low power server systems with chip multiprocessor technology. Afara was purchased by Sun Microsystems, Inc. in 2002. While at Sun, Olukotun was one of the architects of the 2005 UltraSPARC T1 processor. From 2002–2017, he was a visiting professor at Oracle’s Processor and Network Products.

The election of Soboyejo and Olukotun, along with 126 others, brings the total U.S. membership of NAE to 2,353 and the number of international members to 299.

According to NAE President, Anderson, election to the academy is among the highest professional distinctions accorded to an engineer.

“Election of new NAE members is the culmination of a yearlong process. The ballot is set in December and the final vote for membership occurs during January.

Individuals in the newly elected class will be formally inducted during the NAE’s annual meeting on Oct. 3, 2021.