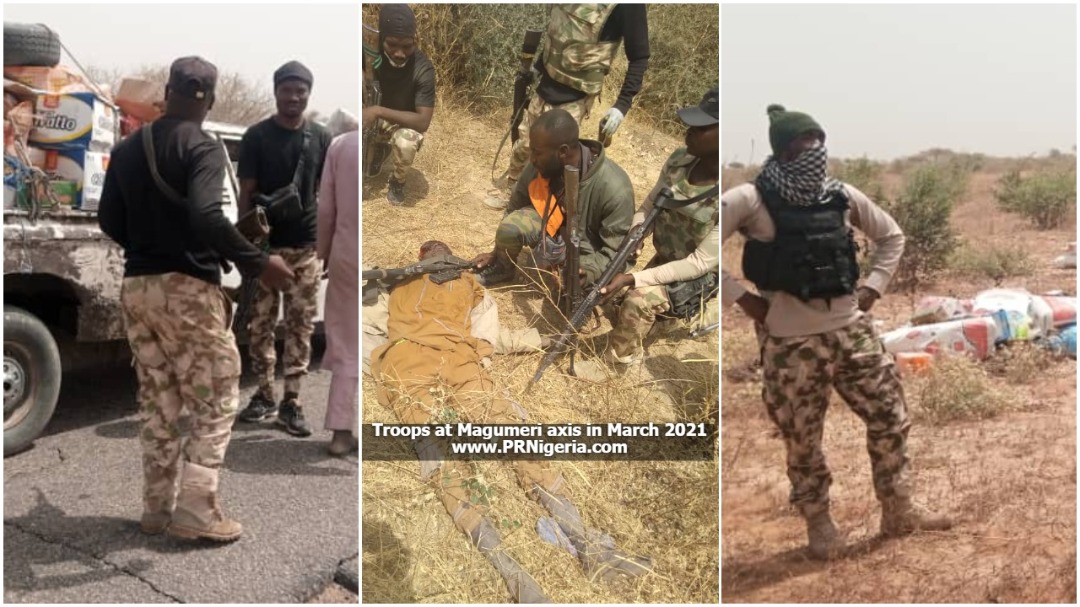 The Nigerian Military has killed scores of Boko Haram and ISWAP terrorists after interrupting them during an invasion of Magumeri in Borno State.

The terrorists were ambushed by the troops on Monday, 22nd March 2021.

Similarly, troops from another sector also burst Boko Haram fighters who were collecting taxes and levies from Villagers, farmers, and herdsmen in Geidam area of Yobe State.

It was reported that the troops led by Lt Col Ibrahim Bunu, acting on a credible tip-off, sighted scores of terrorists around 5pm on about 10 motorcycles heading towards Ngowala ward in Magumeri Local Government Area, ambushed and eliminated them.

The troops were assisted by members of the civilian joint task force according to a statement made available to Naija News by PR Nigeria on the matter.

In a similar development, some suspected terrorists who were collecting taxes and levies from villagers and herdsmen in Geidam, Yobe State have been dislodged by troops.

It is understood that the terrorists had been extorting residents and herdsmen at Abari, Dawayya, Gonisaleri and Tattukuttu Villages in Geidam Local Government Area.

They usually collect one cow for every 40 cows as tax and issued a receipt to the herdsmen, showing the number of cattle collected so far and the next collection date, a Villager told PR Nigeria.

Meanwhile, Governor of Rivers State, Nyesom Ezenwo Wike, has called for the immediate withdrawal of soldiers from politicians.

Wike made the call on Tuesday when he received the Chief of Army Staff, Lieutenant General Ibrahim Attahiru, at the Government House in Port Harcourt.

He asked the Attahiru to withdraw soldiers from politicians so that the officers can secure the country effectively, adding that the Nigerian Army is overstretched.

Wike advised the Army Chief not to engage in politics, lamenting the role played by the army in the 2019 election in River state.

The governor urged Attahiru to curb the security challenges facing the country and make a difference in his new position.