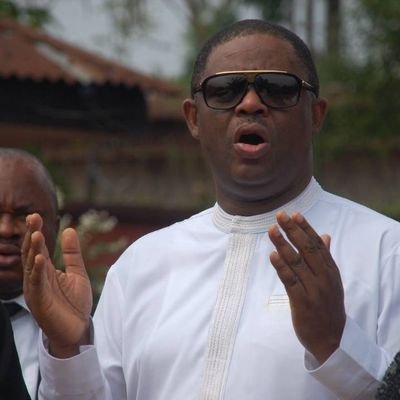 Former Minister of Aviation Femi Fani-Kayode has described the warning of Governor Rotimi Akeredolu of Ondo State to Sunday Igboho as misguided, misinformed and unacceptable.

It would be recalled that Akeredolu had warned Sunday Igboho Adeyemo and others agitating for a sovereign Yoruba State to stay away from the state.

Supporters of the activist had stormed Lagos State on Sunday where they organized a rally to create more awareness on the need for the creation of Yoruba Nation.

But speaking while swearing-in Princess Catherine Oladunni Odu as the new Secretary to the State Government on Monday, Akeredolu said Ondo people have decided to stay in the Federal Republic of Nigeria as constituted at present.

He said no part of the entire state, known and delineated as Ondo State, would permit any gathering or agitation of Yoruba nation.

But reacting in a lengthy statement on his website, Fani-Kayode reminded Akeredolu that the Yoruba nation had recently backed him.

According to the former minister, Igboho and his supporters have every right to agitate for the emancipation and self-determination of the Yoruba people and to call for a referendum on Oduduwa Republic.

“I have immense respect for Governor Rotimi Akeredolu SAN and I admired the way in which he gave a quit notice to the foreign killer Fulani terrorists to leave the forests of Ondo.

“Every son of Oduduwa stood behind him on that. wealso stood with him when people like Buba Galadima called him an “educated illiterate” simply because he did the right thing and sought to protect the lives and property of his people.

“However his warning to Sunday Igboho to stay away from Ondo state is misguided, misinformed and unacceptable.

“Igboho and his supporters have every right to agitate for the emancipation and self-determination of the Yoruba people and to call for a referendum on Oduduwa Republic as long as they do so without breaching any laws or indulging in any acts of violence.

“Ondo state is part and parcel of Yorubaland and it would be a grave error on the part of Governor Akeredolu or anyone else to assume thst the majority of people in his state are against the establishment of Oduduwa Republic or that they do not have the right to even meet and talk about it.

“The truth is that those who want to keep Nigeria one ought to reach out in love to the dissaffected and disillusioned that do not and try to convince and persuade them to stay in Nigeria and give he another chance rather than talk down to them and say that they have no right to seek to leave.

“There is absolutely nothing that is “settled” about the unity of Nigeria. If we want to keep her one then we must work at it and build bridges of peace, mutual respect and understanding.

“Outside of that those that seek to resist and oppose slavery, subjugation and tyranny have every right to do so in a lawful and legitimate manner.

“I have always believed in free speech and the right to self-detemination but I am also committed to peace, non-violence and stability.

“As long as Sunday Igboho and those who are with him do not violate any of the latter three I think it is unwise, inappropriate and counterproductive to tell them to stay out of Ondo state.

This is especially so given the fact that millions of his supporters and those that share his views are sons and daughters of Ondo state.

“To tell them to stay away from Ondo and not to come there to freely air their views is a gross violation of their constitutional rights.

“The way to handle the agitation for separation is by positive and friendly engagement and not by banning people from coming or talking or issuing threats and ultimatums.

“Governor Akeredolu, perhaps more than any other Governor in the SW, has earned the love and respect of millions of Yorubas all over the world in the last few months with his strong actions against the foreign Fulani invaders from Mali, Niger, Chad and Senegal that have taken over our forests and that are killing our people.

“His courage is exempelary and second to none and he dared to do what others refused to do. I appreciate this. He must however appreciate the fact that millions of our people feel short-changed by Nigeria and though they are committed to keeping the peace, they also have the right to voice their concerns and their aspirations and desires.

“I appeal to the Governor to be less combative to those who have rallied behind him more than anyone else over the last few weeks, appreciate their pain, understand their objectives and enter into dialogue and negotiations with them. That is far better and wiser than seeking to intimidate, threaten or demonise them.

“We may disagree with one another on approach or strategy but one thing is clear: we all love and cherish the South West and her people.

“Let us build a bridge of peace and understanding amongst ourselves and let us not talk down to one another either privately or publicly.

“Sunday Igboho is not an enemy of Governor Akeredolu or the people of Ondo state. He is probably the best and most loyal friend they have had in many decades.”