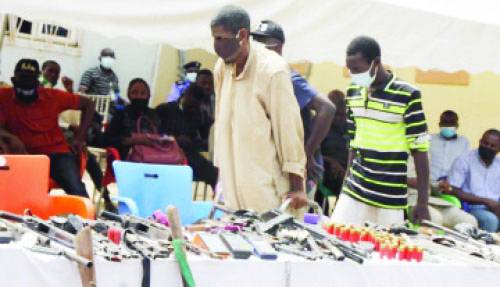 A physically challenged man identified as Musa Usman, has revealed how he deceives security operatives at checkpoints to supply hard drugs to bandits, terrorists and other criminals in the country.

The suspect disclosed that he had been transporting hard drugs from Anambra State to Nasarawa State, where he delivers drugs to bandits.

He noted that he puts the cocaine in his pocket or a traveller’s bag whenever he has a supply to make.

Usman further stated that because of his disability, security agents at checkpoints usually have pity on him and do not search him.

He said drivers and passengers also show him compassion until he gets to his destination.

The suspect added that he usually hands over the drugs to his partner, 27-year-old Ahmed Shuibu, in Nasarrawa who would then take the drugs to the bandits in their enclaves, collect his money and bring it to him.

He said he gives the drug to his partner because he can not move around due to his disabilities, but the his partner gets the job done and shares the proceed with him.

He noted that an end came into his crime when men of the Police STS swooped on him following an intelligence report.

Musa claimed he went into the cocaine business because of the huge profit in it.

He said he gets his supply from one Odogwu, a major dealer in the area.

He, however, said he sells at a special price to the bandits because of the risk involved in transporting the drugs to them.

He said: “My name is Musa Usman. I come from Anambra State. I speak English, Hausa and Igbo fluently. I was arrested in Nasarawa State with 20 grams of cocaine.”

“I got into selling cocaine because that is the major business in Anambra State and people who are into it have plenty of money. One of my friends introduced me to it and since then I have been selling drugs. But I took my own to another level by selling to bandits because these people need drugs so I made contact and decided to be supplying them.”

“Because I speak Hausa, it was easy for me to communicate with them.”

“Because I sell after buying from him, he gives me the drug at a whole sale price. He usually sells one gram for N8,000, to me and I sell at N10,000 per gram. But I have a special price for the bandits because I have to add my transport money, feeding money and other expenses I made (incur) on the road. After all, travelling from Anambra to Nasarawa State is far and costs money.”

“I have not been too long in the business, I started in December and I have made good money. For each gram that I sell for N10,000, I make N2,000 as profit. I used to buy from Odogwu. We have a place where we meet, he can never allow you to know his house.”

“I don’t have any special thing that I do to beat all the security checkpoints on the road from Anambra to Nasarawa. I just carry my stuff in the bag and off I go. I don’t even hide the drugs, I carry them like that, either in my bag or pocket; nobody suspects me of anything because of my condition.”

“I was arrested through tracking by the police. I decided to use another method to sell my cocaine because everybody is selling drugs in Anambra and I know that bandits need drugs to do their work; so I made contact and started the business.”

“But I don’t do the supply directly because these people stay in the bush and I cannot trek for that long and even if I try to do it myself, people will spot me and call the police or army so what I did was that I employed somebody young who has my vision and he has been very loyal as he sells to bandits and returns my money the way I have asked him to sell and this is what we have been doing until the police arrested us.”