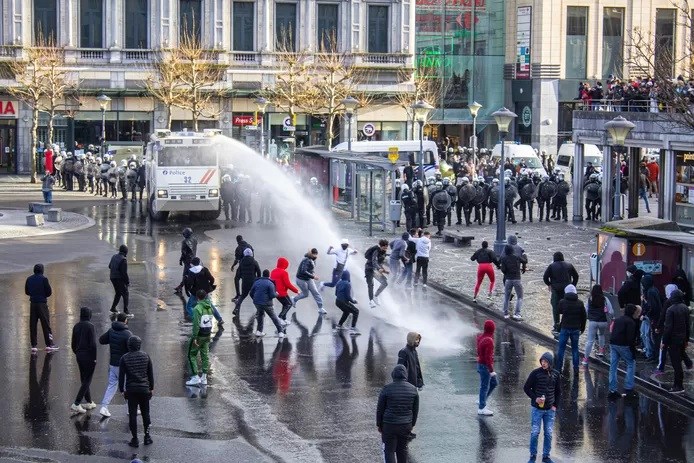 Liege this morning is recovering from a riot involving about 200 youths who broke away from a peaceful demonstration against police violence to attack police and ransack the city centre, sending nine people to hospital, including five police officers.

The trouble began in the margins of a peaceful Black Lives Matter demonstration, sparked by an incident of police violence against an African woman earlier in the week.

As the BLM demonstration dispersed, about 200 youths broke off and began throwing paving stones, traffic signs and bottles at police. Several officers were injured, and one who was singled out by youths on the Place Saint-Lambert was attacked.

In total, nine people were reported to have been injured, five of them police officers.

The crowd then moved on to breaking shop windows and looting. The scene resembled a similar incident in Brussels in June last year, when a peaceful protest in front of the Justice Palace devolved into fighting and looting.

“They clearly set out to cause damage,” said police spokesperson Jadranka Lozina. According to the police, those responsible deliberately sought confrontation and quickly formed into groups.

One of the establishments targetted was the McDonald’s restaurant on the Place de la République Française. The mob then moved on to attack a police station which was pelted with stones, as were several police vehicles.

Several windows of the city hall were also smashed.

At one point a crew of the French-speaking public broadcaster RTBF found itself surrounded in its car by a group of men armed with iron bars, apparently intent on preventing coverage of the riot. Elsewhere, a reporter for RTL new was disturbed while presenting a live report from the scene.

By that time police had been reinforced and were present in numbers of around 250, in riot gear and accompanied by three water cannons. Local city police were reinforced by officers of the federal police. They encircled the Place Saint-Lambert, where about 50 rioters were gathered, and deployed tear gas in return for projectiles.

Meanwhile, a message had gone out via local media asking people to avoid the city centre. Mayor Willy Demeyer (PS) sent a message via the BE-Alert system to businesses in the vicinity, asking them to close.

By around 20.00 on Saturday evening, calm had returned to the city centre, although police maintained a presence to protect shops that had been looted.

“There will be strict security all night. Traders have been asked to take photos of the damage. The city services will be available to help them,” Liege police said in a press release.