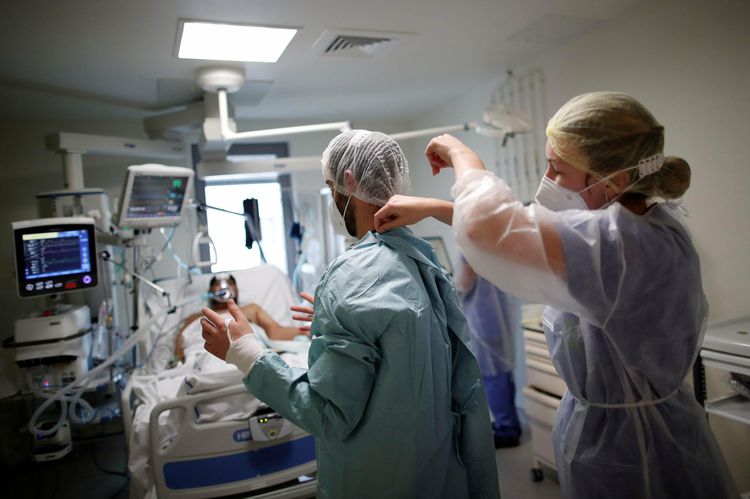 France reported 30,303 new coronavirus infections over the past 24 hours on Wednesday, rising above 30,000 for the first time in two weeks.

The number of people treated in intensive care units for the disease was unchanged at 3,918, halting a five-day-long increase, but staying at a three-and-a-half-month high.

Health Minister Olivier Véran is due to give his weekly Covid-19 briefing on Thursday but no major announcements are expected, even though some health experts say the hospital system in the greater Paris region is close to breaking point.

Hospitalised patients in the northern Hauts-de-France region were set to be transferred to facilities in Belgium starting Wednesday, local health authorities said. The city of Dunkirk and its surrounding area have been especially hard hit by the latest wave of the pandemic in France.

Government spokesman Gabriel Attal confirmed Wednesday that “a certain number of medical evacuations” would be taking place “in the coming days”, in order to relieve hospitals in the worst-affected regions. Paris could be next on the list.

The seven-day moving average of new cases, which evens out daily reporting irregularities, stood at 21,836, above 21,000 for the 14th time in 15 days.

The government says that average new cases figures should be under 5,000 for the pandemic to be considered to be under control.

Since the outbreak of the disease more than a year ago, France has reported 3.963 million cases, the sixth-highest total in the world.

There were 264 new deaths over the past 24 hours, taking the total to 89,565, the seventh-highest in the world, versus a seven-day daily moving average of 289.

The health ministry also reported on Wednesday that 4.32 million people, or 6.5% of the adult population, had received a first coronavirus vaccine and 2.10 million had received a second shot, for a total of 6,425 million injections.

The government aims to vaccinate 10 million people by mid-April – less than a sixth of the total population – 20 million by mid-May and 30 million by the summer.