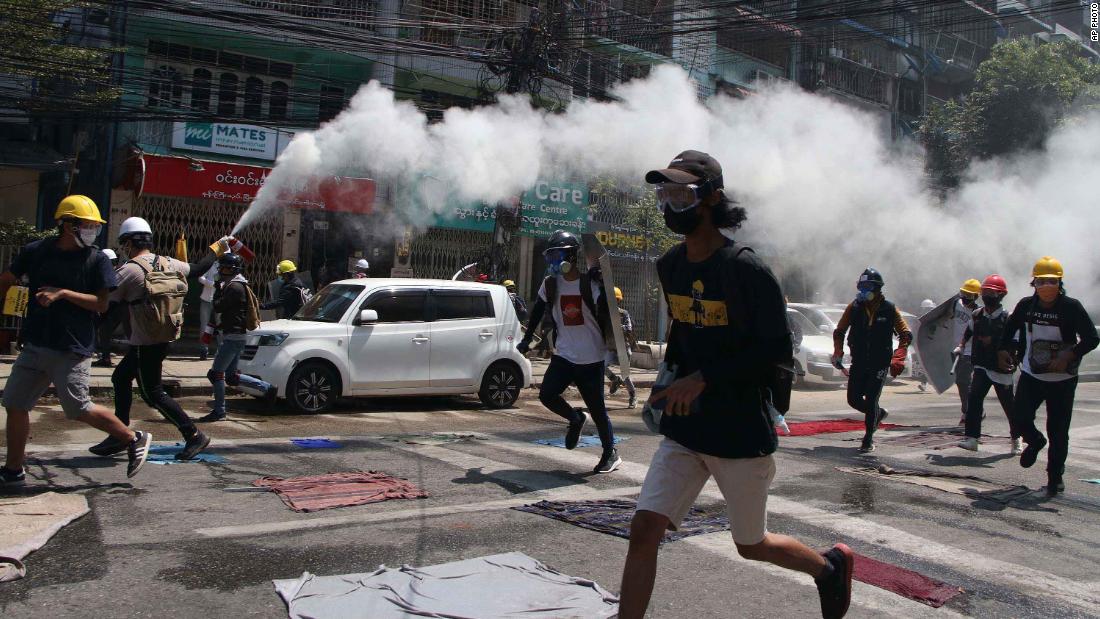 Hundreds of young Myanmar protesters who had been trapped by security forces in a district of Yangon overnight have been able to get out, activists said on Tuesday, after calls from western powers and the United Nations for them to be allowed to leave.

Thousands of people defied a night time curfew to take to the streets of Myanmar’s main city in support of the youths in the Sanchaung district, where they had been holding a daily protest against the Feb. 1 coup.

The army takeover and arrest of elected leader Aung San Suu Kyi has plunged Myanmar into chaos. Security forces have killed over 60 protesters and detained more than 1,800 since then, an advocacy group said.

In Sanchaung, police firing guns and using stun grenades announced on Monday they would check houses for anyone from outside the district and would punish anyone caught hiding them.

Youth activist Shar Ya Mone said she had been in a building with about 15 to 20 others, but had now been able to go home.

“There were many free car rides and people welcoming the protesters,” Shar Ya Mone said by telephone, pledging to keep demonstrating “until the dictatorship ends.”

Another protester posted on social media that they had been able to leave the area at around 5 a.m. after security forces pulled out.

U.N. Secretary-General Antonio Guterres had earlier called for “maximum restraint” and the safe release of all protesters without violence or arrests, a call echoed by the U.S. and British embassies in Myanmar.

An advocacy rights group said around 50 people had been arrested in Sanchaung after police searched houses, though checks were still being made.

A junta spokesman did not answer calls requesting comment.

State television MRTV earlier said: “The government’s patience has run out and while trying to minimise casualties in stopping riots, most people seek complete stability (and) are calling for more effective measures against riots.”

Three protesters were killed in demonstrations in northern Myanmar and the Irrawaddy Delta on Monday, according to witnesses and local media.

Demonstrations have been held daily for more than a month to demand the release of Suu Kyi and respect for the election her National League for Democracy (NLD) party won last November.

The army took power citing fraud in the ballot – an accusation rejected by the electoral commission. It has promised another election, but without giving a date.

The military has brushed off condemnation of its actions, as it has in past periods of army rule when outbreaks of protest were bloodily repressed.

This time it is also under pressure from a civil disobedience movement that has crippled government business and from strikes at banks, factories and shops that shut much of Yangon on Monday.

In a diplomatic blow to the junta, Myanmar’s ambassador in Britain followed its U.N. representative in calling on Monday for the release of Suu Kyi – drawing praise from British foreign minister Dominic Raab.

Britain, the United States and some other Western countries have imposed limited sanctions on the junta.

The European Union is preparing to widen its sanctions to target army-run businesses, according to diplomats and two internal documents seen by Reuters.