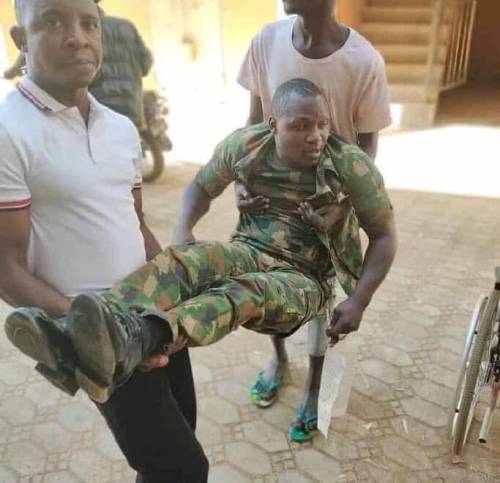 Mohammed explained that life has been difficult for him since 2015 when they had the accident along Maraban/Jos Expressway in Kaduna.

Abdullahi Mohammed, a Nigerian soldier, of the 212 battalion in Maiduguri has made some allegations against the army.

He accused the Nigerian Army of deceiving and abandoning him after an accident he had with two of his colleagues.

Mohammed told SaharaReporters that life has been difficult for him since 2015 when they had the accident along Maraban/Jos Expressway in Kaduna.

He added that two of his colleagues, Jamilu Ahmed and Peter Hamisu died in the accident.

Mohammed said they were guarding the residence of a Colonel identified as Dr Hassan on the 5th of June, 2015 when his wife called them around 2 am that some Fulani herdsmen were about to steal cows at the husband’s farm.

He claimed they insisted they would not leave the building but were forced by Colonel Hassan who told them to move immediately to his farm and protect the cows from being stolen.

He added that they had the accident on their way the farm.

“It was A. A. Babalola that selected us to go to Colonel Hassan’s house, about four of us. While on duty in his house, the wife called us around 2 am in the night, she said some Fulani people were at her husband’s farm, stealing their cows, and that we should go and rescue them,” he told SaharaReporters.

“We insisted that we would not go but we were forced to move out at that time to the farm. On our way to the farm, we had an accident that led to the death of two of my colleagues while I was unconscious in the hospital for months. Later, I was told my colleagues were dead. L/cpl Jamilu Ahmed and one Peter Hamisu of the same battalion.

“From that time, till now, I swear to God, Nigerian Army has not done anything for me. I have really suffered, I don’t have anybody, I’m an orphan. Even the Colonel we were told to guard his house didn’t say anything. My wife left me, I lost my father in 2001, I lost my mum in 2003 before I finished secondary education.

“I have written several letters to the army; they should please take care of me. I’m a poor person, I don’t have the kind of money needed for my treatment. I know people who had the same injury I sustained but are now walking well, some are walking with sticks. I feel pain everywhere on my body, even in my leg.

“It’s sad that the army can abandon me like this, so sad. I met with the former Chief of Army Staff (Lt Gen Tukur Buratai) who promised to help me then but nothing was done till he was sacked by the President. Nigerians can as well help me to walk again.

“I’m a gallant soldier who is ever ready to serve my fatherland but this is how life has changed my situation. I cannot walk, I cannot urinate unless through a pipe and rubber. I have a problem with my spinal cord. Nothing serious has been done by the commander

“I’m now calling on all Nigerians to come to help me as I have no one to assist me. Please, I don’t want my life to end like this, I have no one currently as I’m an orphan.”