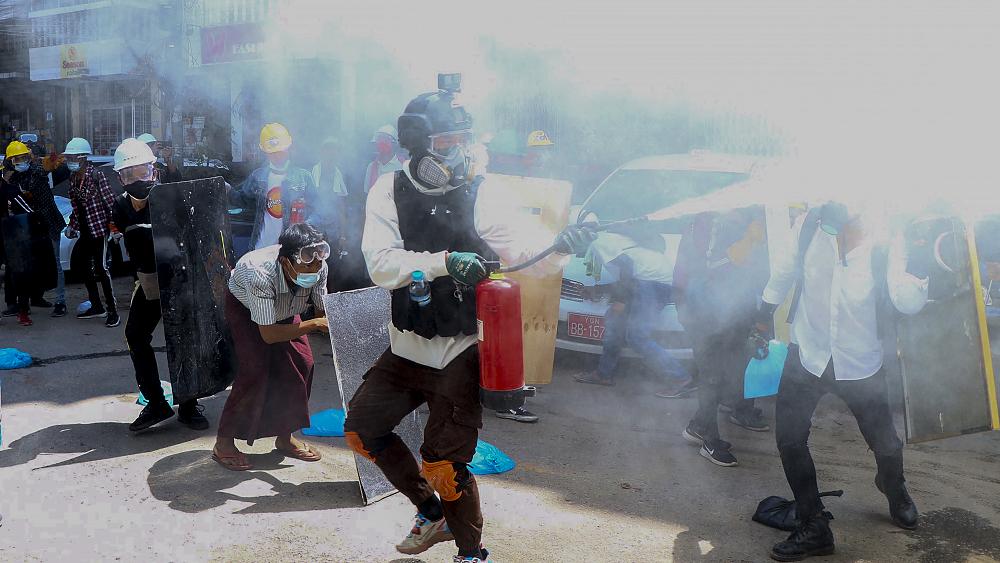 The United Nations’ Human Rights chief called on Myanmar’s military to “stop murdering and jailing protesters” on Thursday, saying at least 54 people have been killed over the previous month.

“Myanmar’s military must stop murdering and jailing protesters. It is utterly abhorrent that security forces are firing live ammunition against peaceful protesters across the country,” she added.

Bachelet’s plea comes a day after 30 people lost their lives in protests in Myanmar on Wednesday, the bloodiest day since the coup on February 1.

In total, the UN’s Office of the High Commissioner for Human Rights (OHCHR) believes at least 54 people have been killed since the military overthrew the government on February 1 including 18 on Sunday and five prior to that.

According to the Save the Children NGO, at least four of those killed were children aged between 14 and 17.

Hundreds have also been wounded while over 1,700 have been arbitrarily arrested and detained, the OHCHR said. These include members of parliament and other elected officials, political activists, civil servants, human rights defenders, teachers, journalists, monks and celebrities.

“However, that actual number of those detained is likely to be much higher, given that demonstrations are reported to have taken place in 537 locations throughout the country where monitoring developments has not always been possible,” the OHCHR stressed.

At least 700 people were detained on Wednesday alone with cases of law enforcement conducting door-to-door searches. Some families have reported receiving no information about where their loved ones have been taken which Bachelet warned “may constitute enforced disappearances”.

She also expressed concern at the targeting of journalists. At least 29 journalists have been arrested in recent days, eight of whom have already been charged with crimes, including incitement to opposition, or hatred of the government, or attending an unlawful assembly.

Several Western countries have also reacted to the escalating violence in Myanmar.

French President Emmanuel Macron called on Wednesday “for an immediate end to the repression in Burma, for the release of those detained and for respect for the Democratic choice of the Burmese people as expressed in the last elections.”

A spokesman for the United States’ Department of State said on Thursday that the Biden administration is “appalled and revulsed to see the horrific violence perpetrated against the people of Burma for their peaceful calls to restore civilian governance.”

“We call on all countries to speak with one voice to condemn brutal violence by the Burmese military against its own people and to promote accountability for the military’s actions that have led to the loss of life o so many people in Burma,” he added.

The UN Security Council is scheduled to meet Friday.

The army alleges widespread fraud in the November legislative election which Suu Kyi’s party won in an overwhelming landslide.

Suu Kyi has since been charged with four offences including violating a telecommunications law, inciting public disorder, illegally importing walkie-talkies and failing to comply with coronavirus restrictions.

But despite the deaths, arrests and violence, people continue to take to the streets.

A formation of five fighter planes flew over Mandalay, the country’s second-biggest city, on Thursday morning in what appeared to be a show of force.

Protesters in the city flashed the three-fingered salute as they rode their motorbikes to follow a funeral procession for Kyal Sin, also known by her Chinese name Deng Jia Xi, a university student who was shot dead as she attended a demonstration the day before. Many thousands of people attended.