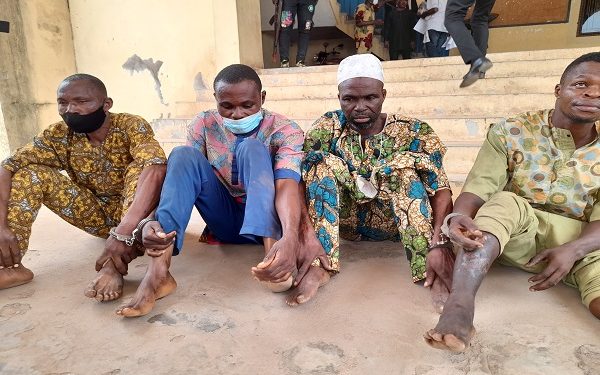 Four men who specialised in stealing at ceremonies have been arrested for stealing phones at last week’s inauguration ceremony of Governor Oluwarotimi Akeredolu for a second term in office.

The event held at the International Event and Cultural Centre also known as the Dome.

Names of the suspects were given as Ojo Femi aged 30, Abiodun Adewale aged 45, Kayode Olarewaju aged 45 years and Aiwole aged 25.

They were reportedly nabbed by men of the Operation Scorpion Squad attached to the Ondo State government along the Ilesha-Akure road while returning to their base in Oyo, Osun and Kwara States.

Seven phones stolen at the inauguration ceremony were recovered from them.

Ojo who admitted to stealing six phones at the Dome said it was his friend that gave him the phone.

He said he lives in Oyo State.

Adewale claimed he picked the phone on the ground before he was caught at the Dome.

He said he used to go to parties to steal phones and usually sold them for N8000 and above.