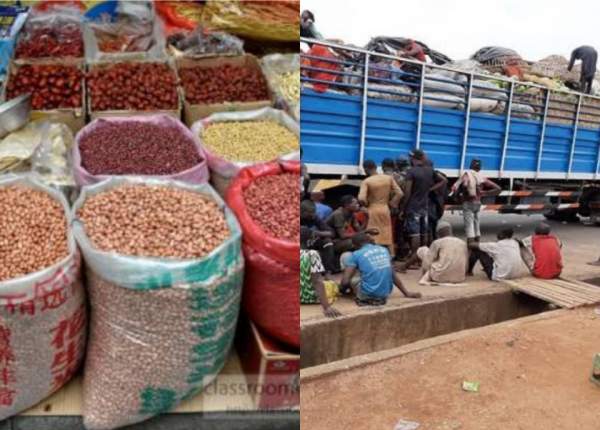 The North gave an ultimatum and went ahead to act according to the ultimatum of stopping Trailers carrying food stuff from coming to the Southwest. I watch a video of where the people in charge stopped the Trailers at Jebba which is a boarder town with Kwara State. The Trailers were stopped from moving down South, they were instructed to turn back or offload their vehicles at Jebba. Only Trucks loaded with petroleum products are allowed to move.

The second issue is that the Herdsmen had not allowed farmers in the South to work. There are numerous incidents of Herders invading farms in the South with their Cows and eating up the crops. A good example is that of Chief Olu Falae’s farm at Ilu Abo in Ondo State; the incessant attacks on farms in Oyo and Ogun State and at times, these Herdsmen go ahead kidnapping these farmers and even kill some of them. Olu Falae was kidnapped in his farm, a farmer at Ajowa Akoko was killed in his farm and there is another example of a Dr that was said to have returned from US to farm at Iganga in Oyo State who was eventually kidnapped and killed after his farm with 300 workers capacity was invaded and all his crops eaten up which issue led to the current crisis in Oyo State.

Now, the North has just demonstrated that they are the food basket of the Nation and that the South may probably not survive without their food and meat. This action of the North is a wake up call to the South especially Southwest.

It is now time for South West to develop a sustainable Agricultural policy that will make the zone independent of other zones food-wise. The Southwest has good arable lands, green vegetation and enough rain to farm and feed itself and also sell to the North.

The Southwest is the most blessed and endowed Region in Nigeria in terms of everything. I am aware that yams are usually transported to the North from May to August of every year from Southwest when Northern yam has not yet matured. I am aware that vegetables are in abundance and fruits are plentiful in South West. Tomatoes and Pepper can germinate and grow anywhere and if conserted effort is made, Onions can be grown in commercial quantities. The Southwest should also go back to goat rearing like we used to do and stop relying on Cows from up North at all time. The Southwest has enough natural water for fish farming and we can also develop our snail farming to commercial quantities.

Let everyone go back to farm no matter how little while government should provide enabling environment for farming to thrive by providing security to ensure Fulani Herdsmen do not kidnapp again or lead their cattle and cow to eat up farms. Let us go back to dry season farming (Fadama) through irrigation as this will make us able to feed ourselves all the year round.

The action of the Northern elements in charge of this “no movement of food to the South” should not be seen as a bad thing to serve as punishment on Southwest but as a wake up call because if we do not learnt from this, the future events may have dire consequences on us in the Southwest.

I wish to humbly call on all the 6 Governors (or is it 7 because the Northern Task Force has excised and exited Kwara State from the North with their latest action at Jebba) to double their efforts in the area of Agriculture and extension services. Let the Governors ensure that no Herdsmen feed their animals with our farms produce in Southwest without such Herdsmen paying for such criminality, let us rid our bushes and forests of criminal Herdsmen by profiling them to ensure that cows are not sent to eat up our farms while the North conduct their own farming without hindrance and disturbance from Herdsmen who from the North to ensure food security in order to prevent a future occurrence of the North thethreatened us with starvation to death through food blockade. The greatest weapon of warfare is blockade of food source. Let us be wise and the time is now! Wake up, Oduans wake up! Let us make hay while the sun still shines.

TOLU BABALEYE ESQ writes from the Office of the Citizens at Akungba-Akoko, Ondo State.