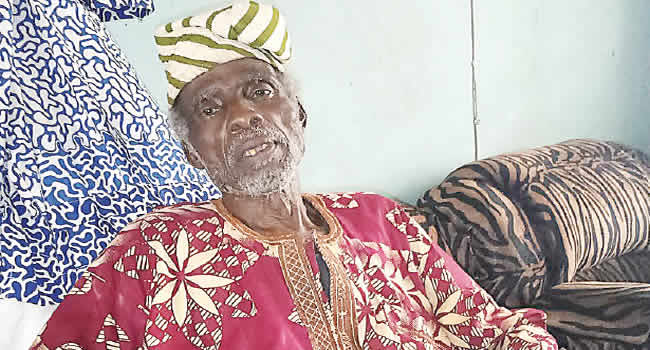 The bereaved father speaks about his son’s journey into the air force and what his untimely death means to the family.

Mr Julius Olawunmi, the seventy-seven-year-old father of Flight Sergeant Olasunkanmi Olawunmi, who, alongside six others, died in the Nigerian Air Force aircraft that crashed in Abuja on Sunday, February 21, 2021, has spoken up.

In this interview with ABIODUN NEJO, the bereaved father speaks about his son’s journey into the air force and what his untimely death means to the family.

How will you describe your late son, Flight Sergeant Olasunkanmi Olawunmi?

The characters of my children are almost the same. But among other things, Olasunkanmi’s humility was uncommon. He was straightforward and decent; he exemplified absolute honesty in all ramifications.

What is his position among your children?

He was number six. His death has created a very great vacuum. I can say he was primus inter pares.

His personality was very dynamic. After his secondary school education, he said he had interest in military work. He was somebody that we could say had a future. Everything about him showed that he had a great future before him.

When he was growing up, did he have the character trait that gave the impression that he would become a military man?

While he was young, at times when we discussed, the way he talked showed he was fascinated with the military. Three of his brothers are in the force. One is an Inspector in the police, the immediate brother is a police officer too with the Special Protection Unit and another one is with the Lagos State Police Command as a riot policeman. He (Olasunkanmi) was the fourth among my children to join the force. Taking a cue from his elder brothers, he said he was interested in the force.

At the time they left secondary school, there were no jobs. Things were difficult then. It was like this present difficult time. The late police AIG, Chris Obadan, was a very good friend of mine; we were both teachers in the same school at Ogotun after his Grade II before he left the teaching service to join the Nigeria Police.

It was Obadan who advised me that instead of allowing my children to roam about, I should let any of them who was interested in the police to give it a try. My three sons did not join the police at the same time because they did not finish secondary school at the same time. The late Olasunkanmi joined the Nigerian Air Force in 2002. So far so good, till now, none of them has disappointed me. None of them has come to me to say we has problem in his place of work because they had been warned very seriously against toying with their jobs. I had cautioned them that they would solve their problems by themselves if they are found wanting. So, they have been very careful. So far, so good, none of them has ever toyed with his job.

When Olasunkanmi decided to join the Nigerian Air Force, did he tell you about it?

I was the one who went to the Cabinet and Special Services Department of the Deputy Governor’s Office in Ado Ekiti, the Ekiti State capital, to obtain the form for him in October 2001. His geo-political zone for the recruitment examination fell to Benin where he took the examination in October 2001. After the examination, before the end of the year, he came to me that somebody told him that he saw his name in The PUNCH newspapers; I told him that he would go to Ado Ekiti the following day to buy the paper, I described the place where he would get the vendor who would assist him to get the previous day’s paper. So, before 11am, my son had returned from Ado Ekiti with this paper (displayed the paper) published on October 26, 2001. When he returned, he said they told them in Benin that the Air Force would not send letter to anybody, but that they should be on the lookout in the dailies for the shortlisted candidates. They listed the names on state-by-state basis; my son’s name was under Ekiti State. This newspaper was the authority that he took to Kaduna for the interview. I told him to bring back the newspaper for record purpose and he returned the paper.

About a week after, he came one morning that the result of the interview had been released and that his name was among those listed as published in the New Nigerian newspapers. I had to go down to Ado where I gave money to my vendor to find the paper and he delivered the paper to me some days later. His name was under the list of successful candidates. He resumed in February 2002.

But after another interview in Abuja, he said the exercise was rigorous and that what he discovered was that when they sent some candidates away, some would bring letter from highly influential Nigerians and that instead of the number to be reducing, it was increasing. He said at the end, they called some names, including his, and gave them transport fare to return home. He said the military authorities did not tell them whether they were successful or not.

At that point, my friend, the retired AIG Obadan, came to my mind as someone who could be of assistance. So, my son and I left Ogotun in Ekiti State for Obadan’s house in Sobe in Edo State. When they told Obadan that I was around, he came down to receive us. He was still in his nightwear that morning. When we got to his guest house, my son, Olasunkanmi, looked at the portraits on the wall and identified a person who he said was among those who conducted the interview for them in Kaduna. I told him it was Obadan that I knew and not the person he had identified. So, when my friend came in, I said, ‘Chris, my son said the man in this photograph was among those who conducted interview for them in Kaduna’. He called my son to identify the person and Olasunkanmi pointed to the person in the photograph again. The person was Air Vice Marshal Ben Obadan. My friend then asked me whether I could not remember Ben, who he said stayed with him (Chris) when he was teaching at Ogotun, Ekiti. Obadan then called my son to tell him about the interview, following which he put a call through to Ben, the AVM. When the AVM asked for my son’s name, upon being told, he checked the list and broke the news of his success in the exercise. That was in early 2002. That was how my son was enlisted in February 2002.

He was exceptionally brilliant, so when he got there, the NAF sent him in 2003 for a two-year course of ‘Airmen Basic Comms. Electronics Maintenance CSE (XIII) EEMS’ at 320 Technical Training Ground, Kaduna. It was the course that made him qualify to be on flights with pilots.

How did you feel having a son in the Nigerian Air Force?

He was doing well as a military man and we were all pleased with him. He even seized the opportunity for higher studies.

How was the news of his death broken to you?

It was a sad day, though it was a holy day. It was a day of mixed feelings. It was a Sunday, then it was a Thanksgiving Day for peace in our church. We – the late Olasunkanmi, his wife and other members of the family – prepared for the thanksgiving event. His wife called me that Sunday morning before I went to church. She had wanted to come to join us, but I told her not to bother. We got to church as early as 8am for the thanksgiving service. We returned home at about 10am for entertainment. When the sad news filtered into town, I was not told immediately, but ultimately, it got to me. I almost passed out on hearing the sad news. It was not easy to get such news on a day like that – a thanksgiving day. I celebrated the day in an unusual way, not knowing it was a sad day. Even people noticed and said I celebrated the thanksgiving in a remarkable way.

What do you think about his death?

It can be in two ways – if one has faith, one can say it was an act of God; that it was the way God wanted it because Job in the Holy Bible said ‘God giveth, God taketh’. Again, we can view it from another angle, that the aircraft was 49 years old and was not in a good condition. Some people are even thinking it was a set-up, but what is hidden to man is open to God.

How did his death affect you?

See also  Something Bad Is Going to Happen to Nigeria in May, June, July - Prophet Iginla Weeps for Nigeria (Video)

As somebody that was useful to the family, straightforward, faithful and was a devout Catholic, it was an irreparable loss. It was a terrible situation. It was very disastrous. He would be missed in view of his responsibility to society, age group and church. He was a hero. He was very much loved.

What were his unfulfilled plans?

He had many unfulfilled plans. He had promised to make this house befitting before Easter. In a polygamous setting as ours, members push responsibilities to one another, but what he told me was that he would renovate this place before Easter. I challenged him that, would he not have done it if he had been my only child? He assured me and told me to calm down. Then, the permanent site of our church under construction, he had pledged what he would do there. He said that in my name as his father, he would give me money for contribution to the project.

When was the last time you saw him?

That was in January. He was here, but he left when he received a signal.

When last did you speak with him on phone?

He called me on Friday, two days before the unfortunate incident.

What did you discuss?

All along, did you have any premonition about his death or that tragedy was lurking around?

I did not suspect anything. My suspicion was about myself, especially with the excitement about the thanksgiving service because I had never prepared for it that way. The last one was in 2019 as we could not celebrate it last year because of COVID-19.

Is there any appeal you want to make to the Nigerian Air Force, Federal Government and Ekiti State Government?

My concern, which is my appeal, is how to take care of his wife and three children. I know I am the father; whatever is done to assist them will be appreciated. Olasunkanmi was one of the breadwinners of the family. All the children play different roles, none of them abandoned me. The vacuum created by his death is enormous.

How many children did your late son have?

He has three male children. They are in nursery and primary school.