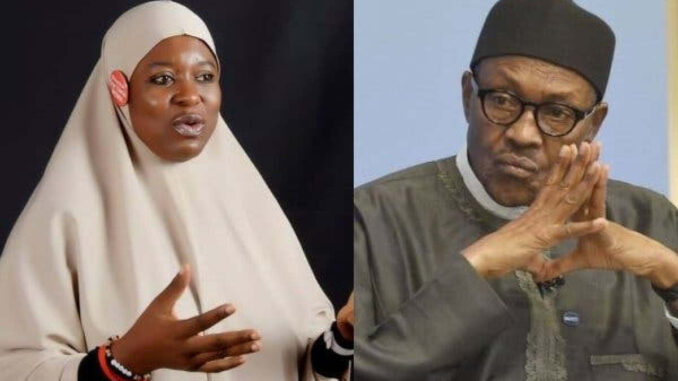 A Nigerian socio-political activist and co-convener of the Bring Back Our Girls Movement, Aisha Yesufu has described the Nigerian President, Muhammadu Buhari as being ineffective, incompetent, and clueless.

She made the statement while responding to questions during an interview on Channels TV on the state of security in Nigeria and the steps being taken by President Buhari to combat the insecurity ravaging the nation.

While responding to a question about her disposition to President’s assurance to Nigerians about efforts being made to rescue all those who have been abducted, Mrs Yesufu said: “what I make of the statement is absolutely nothing”.

“We are used to a president whose words mean nothing. He says one thing, and another thing happens,” she added.

She stated that the President is not bothered about issues happening in the country thereby enabling the terrorists through his body language.

“The body language of President Muhammadu Buhari enables the terrorists. They know that we have an ineffective President and Commander-In-Chief, we have an incompetent one a clueless one, who does not even bother about what is happening in the country”, the BBOG Co-convener said.

She also berated Mr Buhari for failing to attend the burial of the Nigerian Airforce officers who where killed in the illfated copter crash that happened last week in Abuja; “Yesterday we buried seven military officers, the best that we have, the nation was in mourning and the President was a few minutes away from where they were and the president didn’t even turn up, what does that signify? It Is high time we begin to make serious demands on the president”.

“This is such a sad moment especially with the fact that our government has not learnt anything in spite of almost seven years of advocacy that we’ve been calling on the government to do the right thing and to do the needful to ensure that the citizens are protected.

“Before the Chibok Girl’s abduction, there was actually the Guniyadi killings where 29 boys were slaughtered in their schools”. have been released by their abductors

The development was disclosed by a credible source to ThisDay, which noted that the abductees are on their way to Minna and should be in the Niger State capital in a couple of hours.