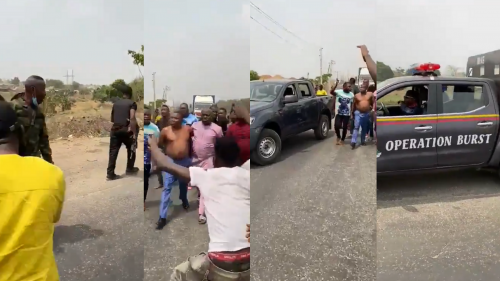 The Department of State Services (DSS) has denied that its operatives attempted to arrest Sunday Igboho on Friday.

The Yoruba activist, Sunday Adeyemo popularly known as Sunday Igboho was blocked by a team of security agents on Friday at about 2 pm.

The situation caused a scene in front of a Satguru Maharaj Ji village, along the Lagos Ibadan highway.

In a viral video, Igboho took off his clothes and challenged the DSS, Police and Army officers.

Others in his convoy and those who recognized him in the area resisted the attempted arrest.

But the DSS has dismissed reports that Igboho was a target.

“The said news is misinforming and should be taken as fake and therefore be disregarded”, DSS spokesman, Peter Afunanya, said in a terse statement.

Fadeyi simply said: “Oyo State Police did not attempt to arrest him.”