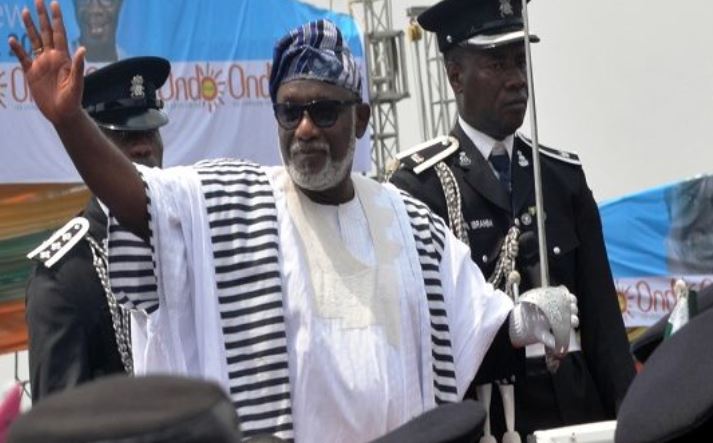 Rotimi Akeredolu, SAN, was on Wednesday sworn in as Ondo State Governor for a second term in office.

He had defeated Eyitayo Jegede of the PDP in last year’s governorship poll to win a second term in office.

He took his oath of office at exactly 10:48am on Wednesday.

Akeredolu was sworn in along with his deputy, Lucky Aiyedatiwa.

Only 500 people were allowed at the ceremony in compliance with COVID-19 protocols.

The oath of office was administered by the Chief Judge of the State, Olarenwaju Akeredolu.

Governors present at the occasion were Babajide Sanwo-Olu of Lagos State; Kayode Fayemi of Ekiti State; Dapo Abiodun of Ogun State and Gboyega Oyetola of Osun State. Former Governor and APC chieftain, Bisi Akande was also at the event.

Mr Akeredolu was re-elected governor of the state on October 10, 2020, on the platform of the All Progressives Congress.

He defeated the Peoples Democratic Party candidate, Eyitayo Jegede, and the current Deputy Governor, Agboola Ajayi, who contested on the platform of the Zenith Labour Party.