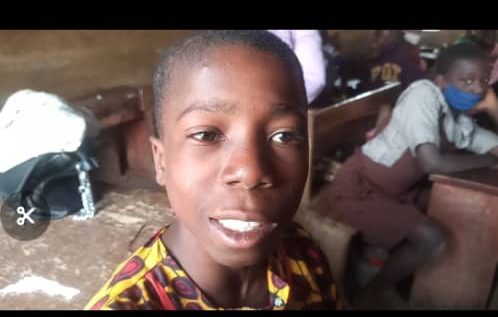 A 12-year old Primary 6 boy of Ayegun Basic School 3,Ogbomoso, David Owolabi, has been celebrated in Ogbomoso for exhibiting rare trait of honesty after returning a lost but found purse containing forty thousand naira and other items to the owner.

The purse was found by the boy on Saturday at Ijeru Basic School, Ogbomoso,venue of a burial ceremony the owner and other guests had attended.

David and his younger brother, Opeyemi were at the party to beg for left over food for their family to survive for the day.

Their father reportedly died last year June and their mother, a petty trader is incapable of taking care of all the six children she bore for the deceased.

It was however surprising that as poor as this boy is he was able to hand over the purse to Toyin Ige and Adaramola Oyadiran who dressed in popular Aso Ebi at the ceremony to enable them give it to the owner.

The two men and other guests could not hide their joy and appreciation for David who could have made away with the forty thousand naira at least to better the lots of his family.

David , who appeared in tattered piece of cloth instantly became a celebrity as his honesty was announced at the party.

Our reporter was at the priimary school of David Owolabi where his story has also been heard by staff and pupils.

The Headmistress,Mrs Esther Okunloye said despite his poor family background and the level of hunger , David Owolabi made his family and the School proud by returning the purse and the money in it.

A trip of our correspondent to the rented apartment of the mother of the boy showed a family with virtually nothing.

The mother, Mrs Ruth Owolabi said David is an honest boy,adding she was always telling them not to take whatever does not belong to them.

Mrs Owolabi added that she was happy that his son refused the temptation of the devil and remembered her warnings on the need to be morally upright irrespective of the situation.