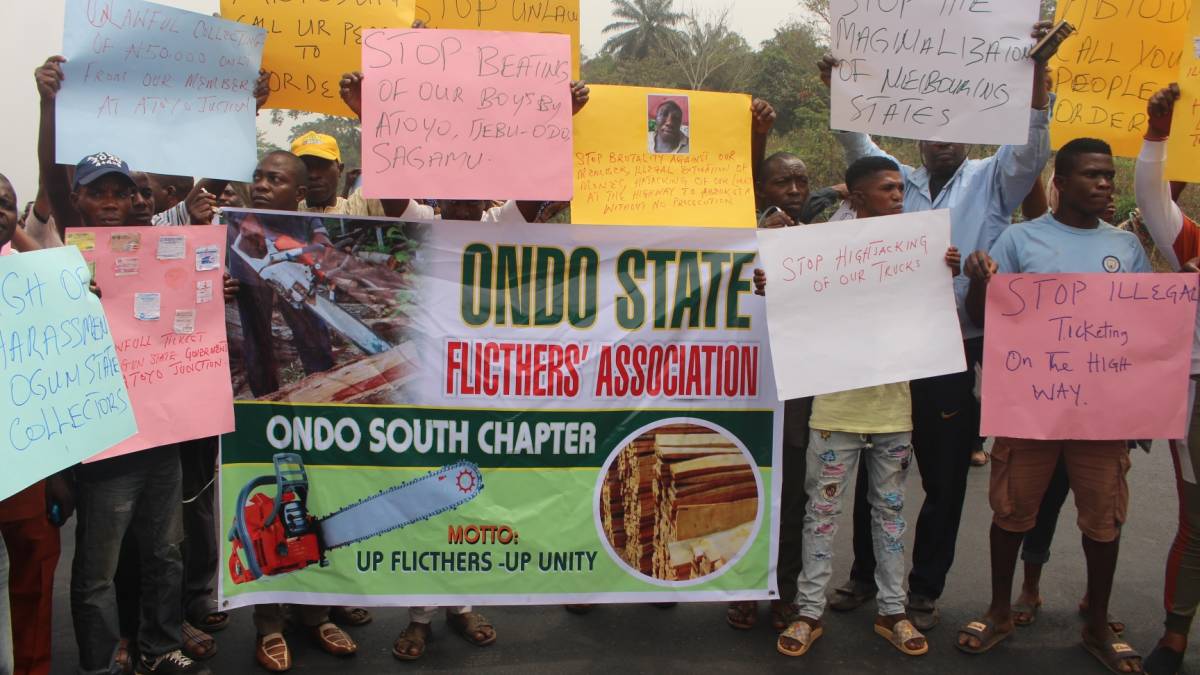 Timber dealers, under the aegis of the Ondo State Filchers Association, on Monday, protested against alleged extortion, molestation and coercion by the Ogun State Revenue Service Agency.

The protesters blocked the Benin-Ore-Ijebu Ode Expressway at the boundary between Ogun and Ondo states at Ajebamide community in the Odigbo Local Government Area of Ondo State.

The leader of the protesters, Mr Mayegun Oloruntobi, said the Ogun revenue agency had been inhumane in its dealings with them.

Oloruntobi, who stated that the Ondo State Government had created jobs and gave members of the association jobs in the forests, said it was disheartening that the Ogun State Government had been making their means of livelihood difficult through the issuance of numerous and unnecessary tickets while they convey logs to the state.

He said, “We are members of the Flitchers Association in Ondo State and we pay to the government in Ondo State. Our government has created jobs through timber work so that we will not be jobless.

“The government has done this for us through our natural resources, but anytime we cross our trucks with goods to Ogun State, Ogun State will bring illegal tickets worth N50,000, while we only pay N7,000 to the Ondo State Government; and if we can’t pay, they will impound our vehicles and take them to Abeokuta and ask us to pay N2m.”

He appealed to Governor Rotimi Akeredolu to intervene in the matter within seven days so that the situation would not degenerate into a crisis, saying, “If nothing is done before the expiration of the ultimatum, there will be a tug of war between the indigenes of the two states.”

In his reaction, the Consultant to the Ondo State Ministry of Natural Resources on Revenue, Chief Alex Ajipe, said that the government had confirmed the alleged extortion, especially at Atoyo on the highway, noting that different kinds of fees were being collected without any basis and described the action as barbaric on a Federal Government road.

“We believe that Governor Dapo Abiodun is a person who believes in the rule of law and he will look into the matter and proffer a solution to it,” he stated.

Ajipe appealed to members of the association not to take the law to their own hands and allow room for more dialogue.

He also appealed to the Ogun State Government to ensure that sanctity was restored on the corridor.

The Ogun State Commissioner for Forestry, Mr Tunji Akinosi, said members of the association had been trespassing into the state, adding that flitching was illegal in the state.

He said, “If flitching is legal in Ondo, it is illegal in Ogun. If you cut timber in Ogun State, it is better you sell in your state; if you cross to our state, the planks will be seized and the vehicle will also be seized.

“We have been seizing and they have been coming to beg, but this month, we made up our minds that any vehicle seized in connection with illegality will not be released.”