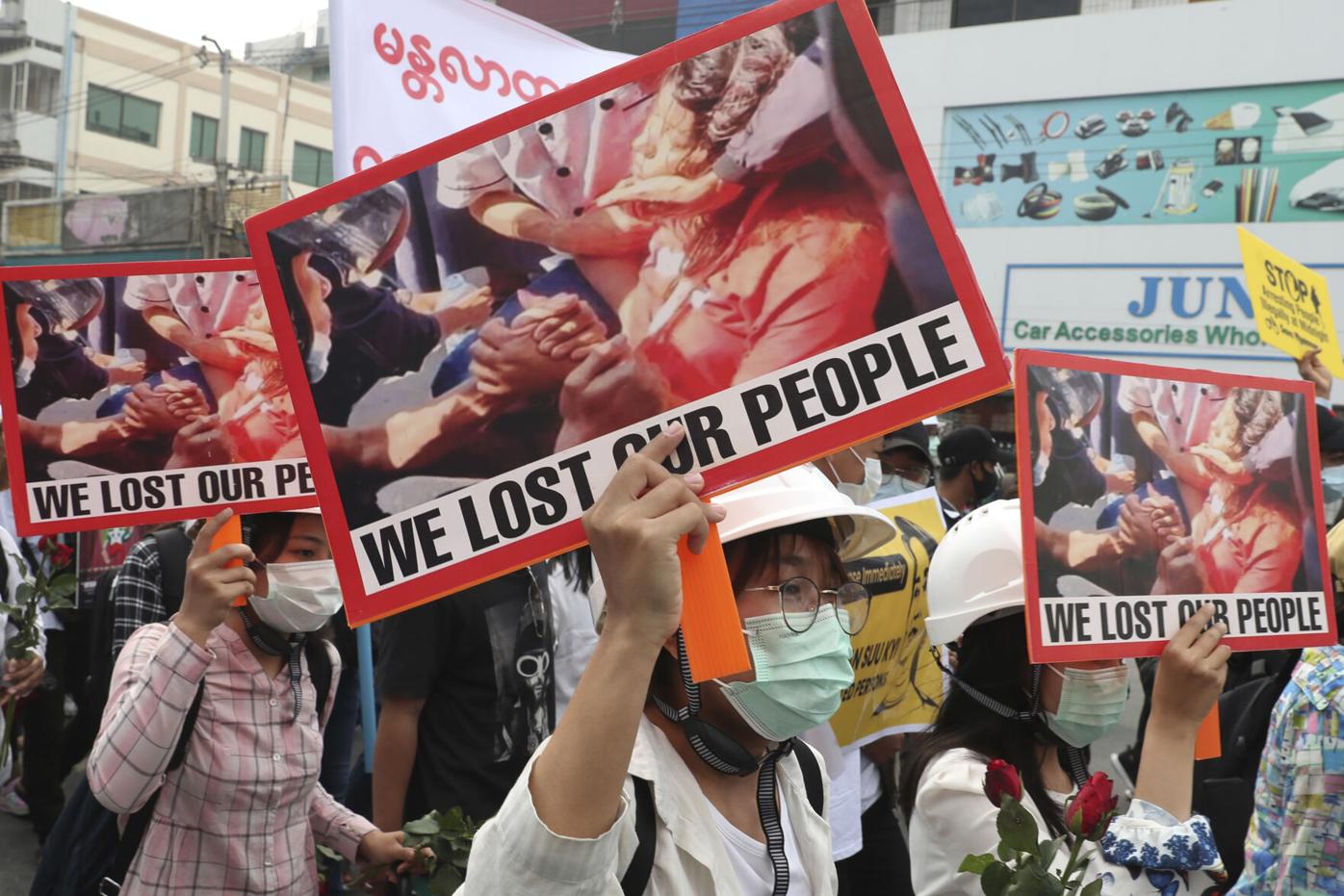 “Twenty people were injured and two are dead,” said Ko Aung, a leader of the Parahita Darhi volunteer emergency service agency in Mandalay.

Some protesters fired catapults at police who responded with tear gas and gun fire, with medics and reporters saying both live ammunition and rubber bullets were being used.

A volunteer doctor confirmed there had been two deaths: “One shot in the head died at the spot. Another one died later with a bullet wound to the chest.”

Much of the country has been in uproar since the military deposed civilian leader Aung San Suu Kyi in a coup on February 1, with hundreds of thousands of demonstrators taking to the streets to protest against the junta.

Authorities have arrested hundreds of people since the putsch, many of them civil servants who had been boycotting work as part of a civil disobedience campaign.

On Saturday, opponents of the coup took to the streets in several Myanmar cities and towns with members of ethnic minorities, poets and transport workers among those demanding an end to military rule.

The clashes in Mandalay came after hundreds of police gathered at Yadanarbon shipyard, on the Irrawaddy river, sparking fears among nearby residents that authorities would try to arrest workers for taking part in the anti-coup movement.

Banging pots and pans in what has become a signature gesture of defiance, protesters started yelling at the police to leave. But police opened fire, dispersing the alarmed protesters.

A Facebook video streamed live by a resident on the scene appeared to carry non-stop sounds of gunshots.

“They are shooting cruelly,” said the resident, who appeared to be taking shelter on a nearby construction site.

An AFP reporter on the ground heard multiple gunshots.

Since the nationwide protests started two weeks ago, authorities in some cities have deployed tear gas, water cannon and rubber bullets against demonstrators.

Earlier on Saturday, young people in the main city of Yangon carried a wreath and laid flowers at a memorial ceremony for a woman who died of injuries sustained in a February 9 rally.

A similar ceremony took place in the capital, Naypyidaw, which has seen isolated incidents since the coup.

“The sadness from her death is one thing, but we’ve also got courage to continue for her sake,” said student protester Khin Maw Maw Oo in Naypyitaw.

The demonstrators are demanding the restoration of the elected government, the release of Suu Kyi and others and the scrapping of a 2008 constitution, drawn up under military supervision, that gives the army a major role in politics.

The army seized back power after alleging fraud in Nov. 8 elections that Suu Kyi’s National League for Democracy swept, detaining her and others. The electoral commission had dismissed the fraud complaints.

Suu Kyi faces a charge of violating a Natural Disaster Management Law as well as illegally importing six walkie-talkie radios. Her next court appearance is on March 1.

He said a meeting in Brussels of EU foreign ministers on Monday “will discuss… the latest events in Myanmar to take appropriate decisions”.