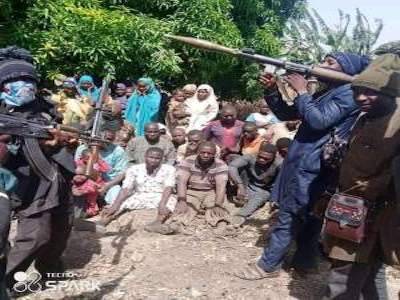 Bandits that abducted 21 passengers in Kundu village, near Zungeru in Yakila District of Rafi Local Government Area of Niger State has released a picture and video showing the victims.

The passengers who were on Niger State Transport Authority bus were abducted on Sunday.

It was gathered that the incident happened around 3 pm. when the bandits waited in ambush as the public transport vehicle ran into the blockade.

In a video clip spotted  on Tuesday, the passengers were seen pleading with President Muhammadu Buhari-led government to come to their aid.

The 45-second video spotted by our correspondents shows the bandits armed with sophisticated weapons and also speaking in Arabic, Hausa and Kanuri.

A member of the banditry group said, “God is the greatest, all praise is due to God alone.”

Boko Haram had in June 2020 released a video and confirmed its link with the armed groups operating in the North-West and North-Central part of the country.

“Special greetings from your jihadi brethren in the Lake Chad Basin. Greetings to our leader Abu Muhammad Ibn Muhammad Abubakar Asshakawy,” a member of the sect said.

“My second message is for all of the Mujahideen, especially those close to us. We send you Islamic greetings.”

“My other message is for all the unbelievers in the world. Repent, you still have time. And if you don’t, wait and see what will happen to you very soon.”

“My message to Kuffar (unbelievers). O’Kuffar, you have time to repent to Allah before Allah Subhanahu Wa Ta’ala punishes you with our hands,” the English speaker warned.

Two months after, the group released another video where its members gathered in an open field said to be located in Niger State to celebrate Eid-el Kabir, a Muslim festival.

“It is we the Jamahatu Ali Sunna li Dawatul Jihad in the location of Niger State. We want to send our Sallah salutation, first of all to our imam, Abu Muhammad Ibn Abubakar Shekau,” one of the terrorists dressed in a Nigerian police uniform said.

Recall that the Deputy Vice-Chancellor of Anchor University, Lagos, Professor Johnson Fatokun, who was recently kidnapped in Keffi, Nasarawa State said his abductors threatened to transfer him to Boko Haram terrorists.

Narrating his ordeal, Fatokun said together with other motorists, he had driven past police and military checkpoints when he encountered the gunmen, who were in military camouflage.

He said, “They asked everybody to come out and lie down. They requested my gun and I told them I did not have any. They searched everywhere and saw my ID card. They also took my ATM cards. They took me through the bush and asked, ‘Do you know what just happened to you?’ They said I had been kidnapped. They assigned some men to me.”

“They went to somebody’s farm and harvested yam. They asked me if I would eat, but I declined. We slept in the open till around 5/6 am then continued the trekking to the mountainous part of the forest.”

READ  5 arrested In Italy For Forcing Nigerian Women Into Prostitution

“They switched on my phone anytime they wanted to continue negotiation with the pastor. When the discussion did not go down well at a time, their leader came and said they would transfer me to the Boko Haram camp and he was no longer interested in money.”

VIDEO: Bandits that kidnapped not less than 21 passengers in Yakila District of Rafi LGA, Niger state a few days ago released footage of their abductees. pic.twitter.com/eLTfpOShvF