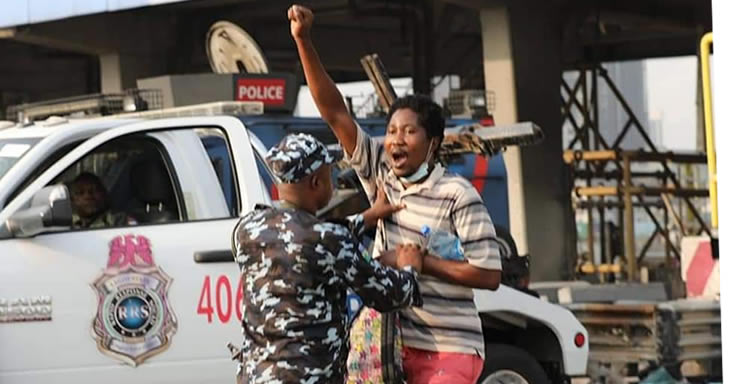 SERAP also said it will pursue legal actions if the arrested protesters are not immediately and unconditionally released.

The Socio-Economic Rights and Accountability Project (SERAP), a Civil society organisation, on Saturday, called for the release of all protesters arrested at the Lekki Toll Gate in Lagos.

SERAP also said it will pursue legal actions if the arrested protesters are not immediately and unconditionally released.

“The United Nations and concerned governments should press the Nigerian authorities to end the crackdown on peaceful protesters, and unconditionally release those arbitrarily detained.

“We’ll pursue appropriate legal actions if the #EndSARS protesters arbitrarily arrested simply for peacefully exercising their human rights are not immediately and unconditionally released. Peaceful assembly is a fundamental right,” it said in a string of tweets.

The PUNCH had earlier reported that popular comedian Debo Adebayo, also known as Mr Macaroni, and about 30 other #OccupyLekkiTollgate campaigners were arrested on Saturday for protesting at the Lekki toll gate where they demanded that justice be served to the victims of the October 20 2020 #EndSARS protest at the toll plaza.

The Lagos State Judicial Panel of Inquiry probing alleged killing of #EndSARS protesters by soldiers at the Lekki toll gate, had decided to hand over the tollgate back to its operators, Lekki Concession Company.

But the #OccupyLekkiTollgate protesters kicked against the move, insisting that justice must be served to the victims of the Lekki toll gate shooting of October 20, 2020.