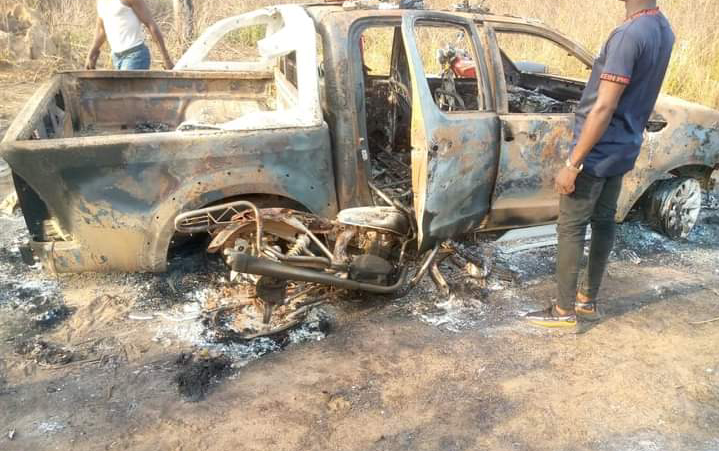 Suspected herdsmen in Ondo have allegedly killed two persons after an attack on men of the State Security Network Agency, also known as Amotekun.

According to reports, the incident occurred on Thursday in Sanusi Village, in the Owo Local Government Area of the state.

It was gathered that a farmer and a vigilante were the victims of the incident.

Also, the operational motorcycles and a vehicle of the Amotekun Corps were reportedly set ablaze by the bandits.

The attack reportedly occurred when the Amotekun men and other security agents were carrying out the order of Governor Rotimi Akeredolu to flush out the herdsmen illegally occupying the forest reserves in the state.

A statement issued by the Public Relations Officer of the Amotekun Corps, Adebayo Ayeni, said the perpetrators had been arrested.

Ayeni said, “Men of Ondo State Security Network Agency have again made another major breakthrough in their efforts to get rid of criminal elements in Ondo State.

“This cartel was piling up arms and ammunition to invade the entire state, while masquerading as herders and using the forest as kidnappers den for negotiation and ransom, illegal mining activities, and cultivation of Indian hemp.

“The security outfits in conjunction with the police, the army, and other security agencies in the state however smoked them out of the forest, after it was discovered that the bandits had killed a farmer and a member of the vigilante group in the area.

“They also went to the village where an Amotekun vehicle was parked and set it ablaze.”

READ Son of former German president stabbed to death while giving lecture in Berlin (photos)
Akeredolu had recently given herdsmen a seven-day ultimatum to leave the state’s forest reserves, saying some criminals masquerading as herdsmen were using the forests to commit crimes.

At the expiration of the ultimatum, a meeting was held in the state involving South-West governors, security chiefs, and officials of the Miyetti Allah Cattle Breeders Association of Nigeria, and at the end of the meeting, the governors announced that open grazing had been banned in the region.